Passion for football drives men to assist on the sidelines 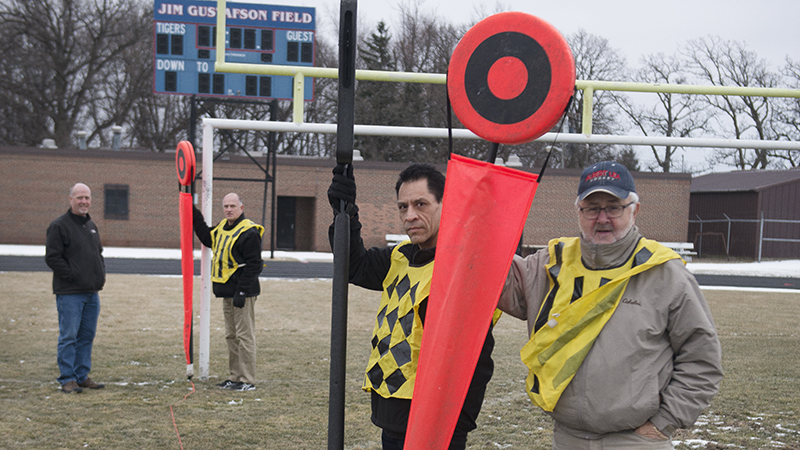 Moving up and down the sidelines, under the lights, in the middle of the action — all of these things would normally describe the average high school football player. However, there is another group of individuals who all of those items can apply to.

The Albert Lea chain gang gets to experience the game up close and personal, being about as close to the football field as you can get without actually being on it. Some of them rotate on a weekly basis; some of them are there every week. Their range of experience runs from one year all the way up to 50 years of service.

Stu Hendrickson, Jeff Jimenez, Josh Johnson, Steve Anderson, Jeff Ehlenz and Bill Intihar were all on the sidelines at Jim Gustafson Field at some point over the past season.

They are the men who hold the orange first down markers, keeping track of where the line of scrimmage is, what down it is and the yard line the teams need to reach in order to continue their drive. 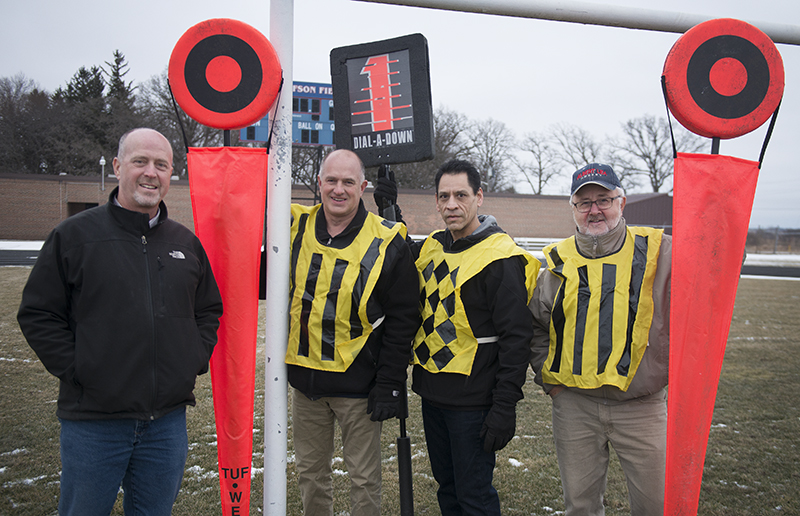 Being in his first year, Hendrickson was a substitute this season for a few games. Whereas, Intihar was there for every game, and has been for 50 years, only missing one or two games throughout.

Although their years of experience vary, there is one common aspect they all share: the love of the game.

Ehlenz, a three-year veteran of the chain gang, said he joined because he likes being on the field in the action and seeing the emotions of the players and coaches. He talked about what it is about football that he loves so much.

“I love defense and clean, hard hits,” he said. “It’s very upsetting to see players leading with the head and getting away from the true way of tackling, which is head up and leading with the shoulder… I also enjoy the animation of our coaches Black and Bitz, as I know them personally and they bring a heck of a lot of passion to the game.”

After being on the sideline for 50 years, Intihar decided to make the 2017 season his last. He said he did it for so long simply because he always enjoyed doing it and he loved being in the great fall weather. He said before this year, he had never even given quitting a thought.

Intihar was also a teacher for 34 years in the Albert Lea school district, teaching an array of business classes during his tenure.

He has seen many teams, players and coaches come through the program over the years — so many, that he can’t pick out a favorite memory or player because there have been too many. He said he hasn’t seen a lot of changes to the game itself over the years, but he has noticed one major difference.

“The game is a lot faster now than it’s been in the past,” Intihar said. “Other than that, its pretty much the same.”

Anderson and Jimenez have been on the crew for a combined 15 years.

“I’ve been on the chain gang for five years,” Anderson said, “It is a fun way to see the game, be involved and be around the kids.”

He said the more memorable games he has been able to work are the ones when the weather has been less than ideal with rain or snow. His favorite part about the sport is the teamwork that everyone needs to have to be successful.

Jimenez, a 1983 graduate of Albert Lea High School, said he “bleeds cherry and blue,” and that he joined the chain gang because he loves football and it was a way for him to be a part of it without coaching or officiating.

Jimenez agreed with Intihar in that the game hasn’t changed a lot, but he does have a favorite player he enjoyed watching.

“Hands down, Kyle Kriewall,” he said. “I watched that guy take hit after hit, and he kept getting up — the gutsiest performance I’ve ever witnessed.”

Hendrickson is a rookie to the high school chain gang this year, but he has been running the chains at different levels for a while.

Hendrickson’s reason for joining the crew was much like everyone else’s. He likes doing it because he is at field level and he is always close to the action. Another big reason why he does it is also his favorite player.

Though the reasons for being a part of the Albert Lea chain gang vary slightly from man to man, they all come back to the same main point: They are doing it because they get to be around the things they love.

50 – Years Bill Intihar has been on the chain gang.

Looking for a trip to the state tournament