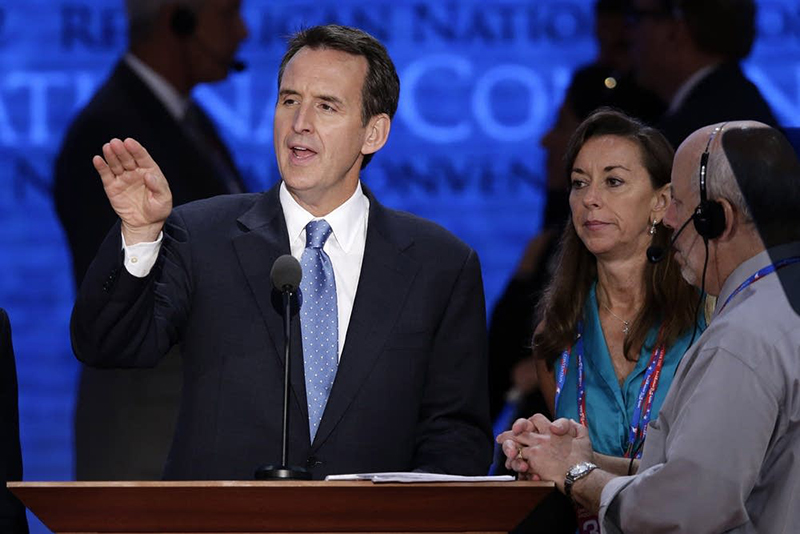 Former Minnesota Gov. Tim Pawlenty looks over the main stage during a sound check at the Republican National Convention in 2012. - J. Scott Applewhite/AP file via MPR

Former Minnesota Gov. Tim Pawlenty will step down in March as CEO of a Washington-based financial services association, a sign he may be moving ahead on a political comeback in Minnesota.

Pawlenty is weighing a campaign for his old job and next week will convene a group of Republican donors and political movers this month as he seeks advice about entering a governor’s race without a clear favorite.

On Tuesday, the Financial Services Roundtable, a trade group and lobbying arm for the banking and insurance industries that Pawlenty’s run the past five years, announced without explanation that Pawlenty was leaving.

“Tim will be really missed but we are thankful for his effective and collegial leadership on behalf of the financial services industry,” FSR chair and Bank of America CEO Brian Moynihan said in a statement.

Pawlenty sent emails recently to a select group, inviting them for a morning gathering on Feb. 12 at an undisclosed Minneapolis location with the agenda as “important meeting regarding Minnesota’s future.”

Pawlenty was out door knocking over the weekend for a Republican candidate in a Minnesota Senate special before taking in the Super Bowl at U.S. Bank Stadium.

Pawlenty, who served from 2003 to 2011, has also been calling Republicans he’s had a prior relationship with to discuss the race.

The ex-governor has been coy about his political plans. He has declared himself politically retired but won’t close the door to a return to public life.

Last month, he ruled out a special election campaign for the U.S. Senate seat that Sen. Al Franken gave up and Democrat Tina Smith now holds.

Since leaving office, Pawlenty ran unsuccessfully for president and took over the Financial Services Roundtable.

Pawlenty, 57, is the last Republican to win a statewide race in Minnesota. He narrowly earned a second term in 2006 in a three-way contest.