Podiatrist helping patients get back on their feet after bunion procedures 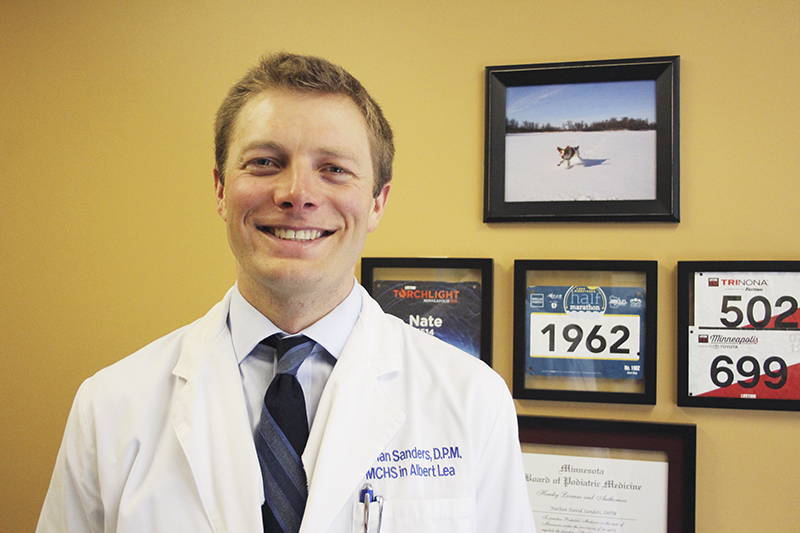 Nathan Sanders was the first in the state to perform Lapiplasty procedures. The technique for treating bunions fixes the rotation of the metatarsal. - Sarah Kocher/Albert Lea Tribune

When you think of bunions, a local podiatrist encourages you to think of the Leaning Tower of Pisa.

For those outside the field, it’s not, perhaps, an immediately obvious comparison. But for Nathan Sanders, who practices podiatry and wound care at Mayo Clinic Health System in Albert Lea, it’s a start at explaining how the surgical procedure he’s using to treat bunions corrects at the source of the problem: its base.

It’s one of many.

“There’s well over 100 different procedures that have been described,” said Paul Dayton, one of the surgical advisers for Treace Medical Concepts who contributed to the Lapiplasty procedure and instrumentation. “There’s no way to count them all, because there’s been so many variations and modifications throughout the years.”

With a bunion, the metatarsal bone, which is below the big toe, rotates outward, causing a bump near the base of the big toe and simultaneously pushing the toe toward the outside of the foot and in toward the rest of the toes.

“It just makes a little more sense to fix it like this,” Sanders said, because with a Lapiplasty, the metatarsal is realigned at the base of that bone and plated into place. The procedure is an anatomical correction that moves the metatarsal back to its normal position, Dayton said. Sanders said the procedure falls in line with what he’s been seeing from recent research in podiatry.

“I think if you look at some of the research coming out now, it’s showing us, I think, that you have to look at bunions in a different way, too, in order to fix the problem,” he said.

And according to the local podiatrist, there’s also an incentive for patients: the aftermath. After some time on crutches, the return to some weight-bearing activities is quicker than other methods. Dayton said the difference is not the total recovery time, but what a patient is able to do — for instance, walking — during the healing that changes with a Lapiplasty. Furthermore, Sanders said the Lapiplasty procedure also may mean not having to correct the problem again later.

“Yes, we plan on it being a long-term fix,” Dayton said. “It has the potential to be the best way to fix a bunion because it restores the normal anatomy. Most bunion procedures don’t restore the normal anatomy; they just remove the bump.”

It’s an outpatient surgery that lasts roughly one hour. Sanders said he has performed approximately 12 procedures this way.

“The system is very specific for this problem in general,” he said. While Sanders has been getting familiar with the system’s nuances, he said it has been straightforward to learn and perform due to his comfort in the operating room.

“It’s fixing the whole entire bunion problem, and that’s pretty neat,” he said. “I don’t think I’ll ever use anything else again, really.”