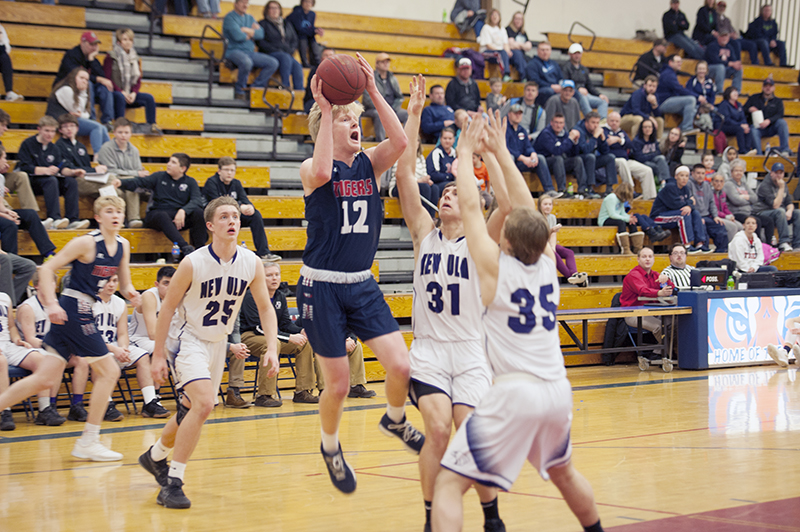 The Albert Lea boys’ basketball team came into Tuesday night’s game against New Ulm hoping to get a win in its final home regular-season appearance.

With the youth basketball teams in attendance and a packed student section, the Tigers played one of their most impassioned games of the year. However, they were unable to stay with the Eagles late in the game, losing 65-61.

Based on the first few minutes of the game, it seemed like the Tigers were doomed for another slow night on offense. The Eagles jumped out to a quick 7-0 lead, but the Tigers refused to stay down, going on a 10-0 run of their own.

The run was led by junior Dylan Scherff with a short jumper and a big momentum-gaining shot from beyond the arc.

Scherff’s first three of the game led to a barrage of three-point baskets for the Tigers. Throughout the remainder of the first half, the Tigers made five three-point shots, contributing to more than half of their first-half point total. 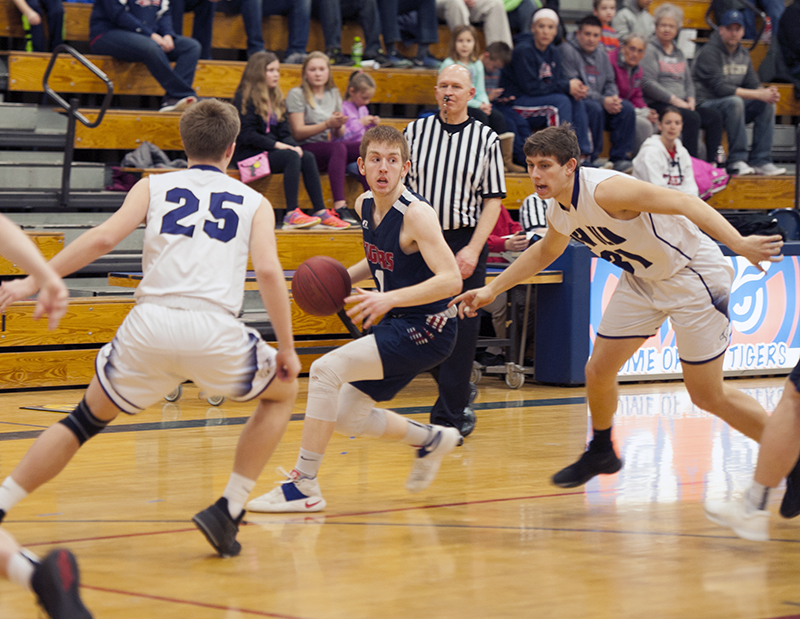 Albert Lea senior Garret Piechowski gets around a New Ulm defender Tuesday night. Despite leading by as much as six in the second half, the Tigers would fall to the Eagles, 65-61. – Tyler Julson/Albert Lea Tribune

After the Tigers took the lead, the Eagles would go back on the attack with yet another run to go up by as many as seven points.

Albert Lea would use the rest of the opening half to claw its way back into the game with the whole team doing its part to keep themselves in the game. Scherff and Doyle led the team with seven points each at the half, but despite the whole team effort, the Tigers would still trail 33-29 at the break.

The start of the second half was all Scherff and sophomore Connor Veldman. The duo could seem to do no wrong as they combined for 15 of the team’s first 20 points and led the Tigers to a six-point lead with 13 minutes remaining in the game.

The Eagles would return a few unanswered buckets themselves to tie the game at 44. The Tigers would get a few more baskets from senior Brendan Fredrickson, Veldman and Scherff, but were unable to keep up with the Eagles down the stretch.

Albert Lea was getting the looks it wanted in the closing minutes of the game; unfortunately, they just weren’t falling.

The Tigers would have one more attempt at a comeback with another outstanding effort from Scherff, who made three free-throws, a driving layup and a contested three-point jumper to bring the Tigers within two points. However, two made free throws from the Eagles would ice the game.

Scherff led the team in scoring with 25 points; Doyle was second with nine and Veldman was right behind with seven.

Albert Lea falls to 0-24 on the season and will play one more game before postseason play begins. The Tigers travel to Northfield on Friday to take on the 16-8 Raiders. 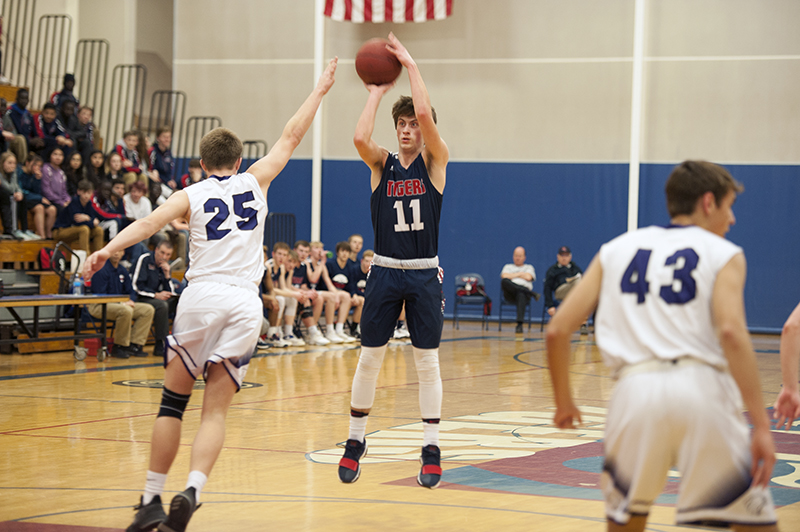