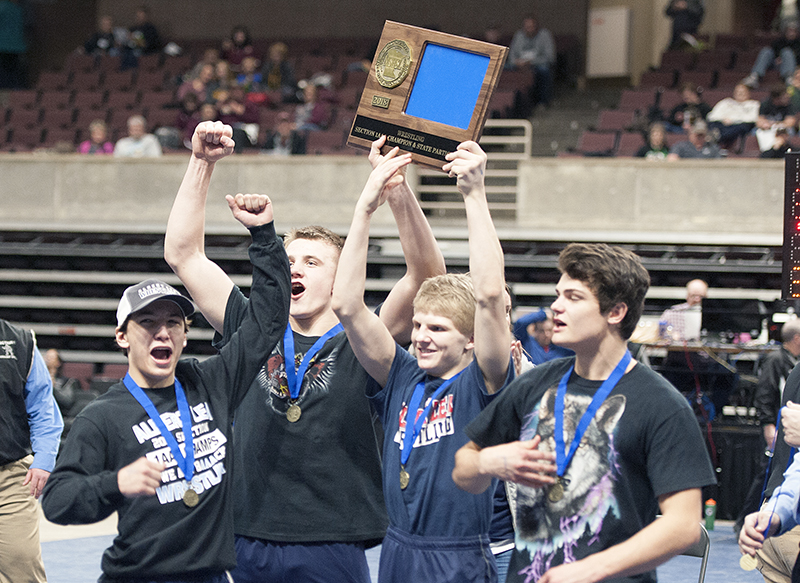 Albert Lea made it past the Falcons in the semifinals, only to meet Owatonna in the finals for a rematch of its three-point loss just two weeks ago.

The Tigers made a few adjustments to their lineup and got a few big decisions to beat the Huskies and earn their spot in the state dual tournament.

In the semifinals, Albert Lea would go up on the Falcons early. Seventh-grader Cole Glazier would win via a 4-0 decision to open the dual. Eighth-grader Cameron Davis would then drop a match in a close-fought decision, 4-2.

The Tigers then went on a four-match win streak to take a commanding lead. Junior Nic Cantu won with a pinfall in the first period, followed by senior Jake Johnsrud winning by technical fall, 21-6. Senior Logan Donovan would notch the third straight bonus-point victory with a 19-8 major decision and senior Gavin Ignaszewski would get a 12-6 decision win at 138 pounds. 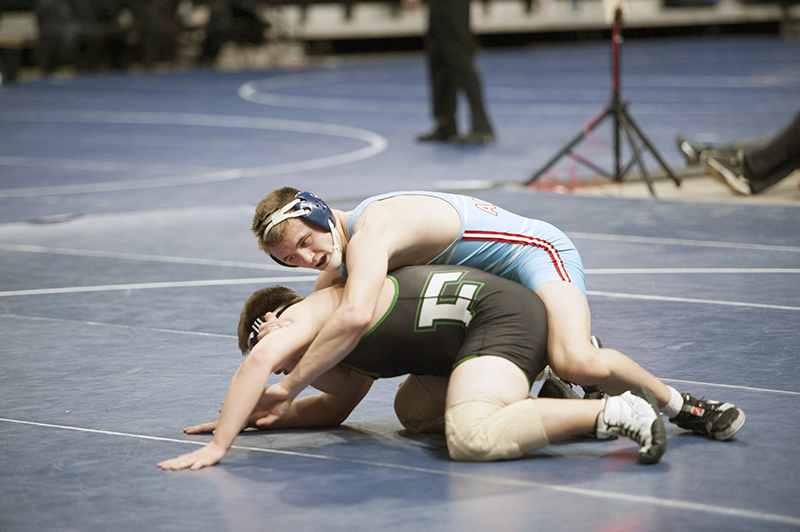 Albert Lea junior Zach Glazier works his grounded Faribault opponent Saturday morning. Glazier would win both of his matches Saturday, one by technical fall and one by major decision. – Tyler Julson/Albert Lea Tribune

Senior Garrett Grandstrand would lose in a major decision, making the score at the halfway point 21-7 in favor of the Tigers.

Senior Ty Harms pulled out another win for Albert Lea with a 12-2 major decision. He was followed by senior Brody Nielsen with a pin in just 55 seconds. Seniors Levi Kermes and Spencer Indrelie both dropped their matches, but at that point the Tigers were winning 31-14 with just three weight classes remaining.

Junior Zach Glazier notched a win at 195 pounds with a 22-7 technical fall. Senior Jaime Valdez and junior Cristian Garcia were pinned in the final two matches of the dual, making the final score 36-26.

Next up was Owatonna, the team Albert Lea had lost to just two weeks earlier in a dual that determined the Big Nine Conference champions.

Cole Glazier and Davis switched weights for this dual, but came away with the same results. Davis lost by decision, while Glazier won by decision. Cantu grabbed a one-point victory to give Albert Lea a three-point lead.

The Tigers would go on to win the next three matches by a total of four points combined. Johnsrud walked away with a 4-2 decision, Ignaszewski won in a 4-3 decision and Donovan won 1-0 after a third-period escape point.

The flurry of decision matches extended the Tigers lead, but the lack of bonus-point wins felt eerily similar to the way the last meeting between the two played out.

Harms lost a one-point decision, followed by the first bonus-point match of the dual, which came from Brody Nielsen getting the fall in the second period. Freshman Griffin Studier and Kermes would lose their matches, which saw the Huskies inch closer to the Tigers with the score then 21-13.

Then, in what would turn out to be likely the most important match of the dual, Indrelie came out and notched a huge victory. After falling behind in the second period, Indrelie turned the tables and put his opponent on his back, earning the pinfall with just 12 seconds left in the second period.

The win sent a wave of momentum into the Tigers lineup, and from that point it was evident they weren’t going to give up their lead.

Valdez would fall in his match, but Zach Glazier would secure the Tigers victory after moving up to 220 pounds and getting a 13-4 major decision. Returning from injury was junior Brady Nielsen, who would get the 5-1 decision win to close out the dual.

The win sends the Tigers to the Minnesota state dual tournament which will take place March 1 at Xcel Energy Center in St. Paul. The Tigers will also participate in the individual Section 1AAA tournament starting Friday and ending Saturday evening. 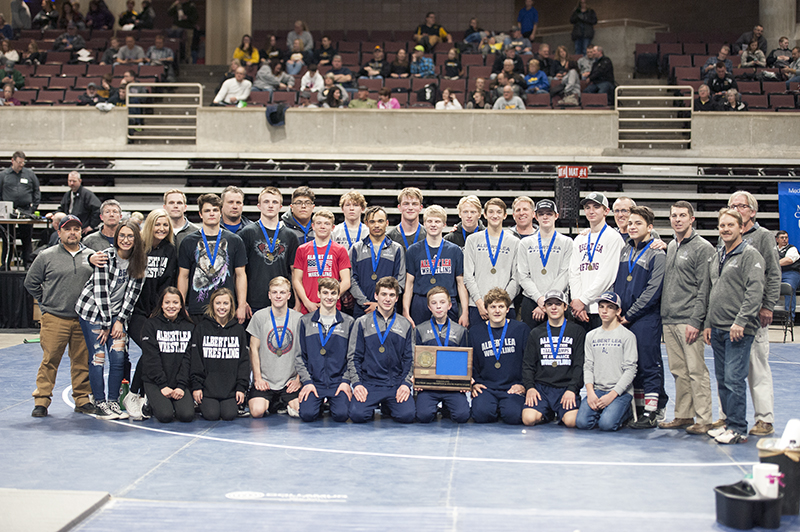