What if it happened here? 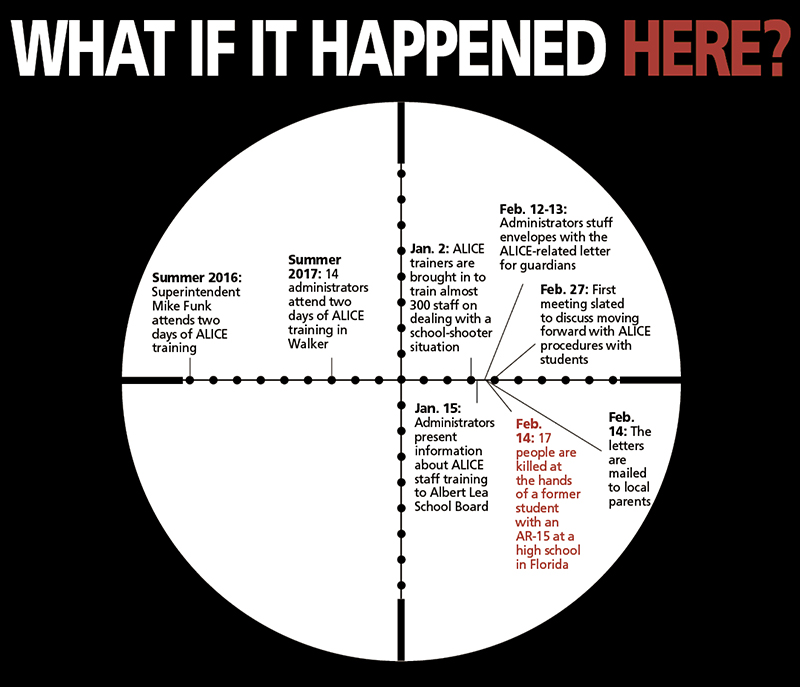 At its core, implementing ALICE — alert, lockdown, inform, counter, evacuate — is about placing decision-making power and knowledge in the hands of more people. - Graphic by Sarah Stultz/Albert Lea Tribune

By Sarah Kocher and Sam Wilmes

On Feb. 12 and 13, some staff at the Albert Lea district office were hand-stuffing envelopes containing letters to parents and guardians of district students. These letters had been prepared by an administrative team as they planned to move forward with ALICE, an active shooter response program the district has been taking steps toward implementing in schools. On Feb. 14, those letters were mailed.

The shooting has sparked discussion across the country about safety in schools and how to prevent more deaths should a similar situation arise somewhere else.

At its core, implementing ALICE — alert, lockdown, inform, counter, evacuate — is about placing decision-making power and knowledge in the hands of more people.

“What can we do as a school system to empower our teachers and our students to make decisions that will help them survive a traumatic incident if one comes up?” Superintendent Mike Funk said.

Director of Secondary Programs Kathy Niebuhr said schools within the district have never conducted an active shooter drill. They conduct lockdown drills. Niebuhr said the lockdown practice for years has been to make sure children are out of the hallway, lock doors, get children out of sight and stay away from glass and doors.

“What we’ve learned from the ALICE training is that’s not enough,” Niebuhr said. “We need to give teachers more skills, and then, obviously, students more skills.”

Niebuhr referred to ALICE’s procedures as “lockdown plus.” After all, it’s not just an active shooter situation that mandates a lockdown. High school Principal Mark Grossklaus said he has called for a lockdown before when changing class times could disrupt handling a difficult situation involving a vulnerable student. In some lockdown situations, teachers may be informed over the intercom system that they can continue teaching, but that no one is to enter or leave their rooms. A lockdown could also be called for a medical emergency, Niebuhr said. Not all lockdowns are created equal.

That’s where ALICE comes into play. Although not sequential, the acronym’s five forming words each provide another viewpoint from which to consider safety procedures during an active shooter situation, and a lockdown procedure specific to this situation.

As it stands, Grossklaus said a lockdown starts with an announcement. Teachers gather students in their rooms, lock their doors and turn out the lights. Administrators pair up and canvas the building, assessing the situation and checking doors. Grossklaus said from the centralized administrative location, it takes about two minutes to reach any given part of the building.

Each school also has a set location to evacuate to, although Niebuhr said the high school’s may be reviewed based on recommendations from ALICE.

Freeborn County Sheriff’s Office members attend regional event response and communication training put on by Minnesota Emergency Communication Board. The half dozen sessions per year allows patrol and command staff to attend and enables local groups to train with first responders from local counties that might need to assist Freeborn County if a shooting takes place.

Training touches on the concept of entering, evaluating and evacuating facilities where shootings occur.

All Sheriff’s Office officers are equipped with rifles, Trijicon optics and mounted flashlights on rifles. Slings allow the rifle to hang on the officers if they have to shift their weapon from a rifle to a pistol.

Officers have digital copies of the floor plans in school districts in Freeborn County available so they can become more acclimated to their surroundings.

“You take those action plans and you couple them with the training we’ve been doing — we’re not perfect, we’re not 100 percent yet, but we’re getting closer,” Freitag said.

‘All on the same page’

The district’s direct interaction with ALICE began with Funk in summer 2016 when he attended two days of training to become a trainer himself. Funk said he had heard the “Run, Hide, Fight” lingo and had started looking into what schools were using. Largely, it was ALICE.

Fast forward a summer. Using health and safety and staff development dollars, 14 administrators took the same course as Funk in Walker, and ahead of this school year, these administrators led an initial training coupled with an online ALICE module. Niebuhr said the feedback from those sessions was, “let’s continue.”

They did so with scenario drills in January, led by ALICE trainers from outside the district. Niebuhr said around 150 people participated in a morning session and about the same number in an afternoon one. The training was open to teachers and front-line secretaries.

The first drill involved a traditional lockdown scenario, and reached just under 300 of the approximately 500 district staff.

“We lock the door and we hope that this 3 inches of wood is going to protect us and our kids,” she said.

Niebuhr said a trainer came in with a Nerf gun and engaged the assembled educators as an active shooter might.

“Anybody who sits through a lockdown after ALICE training is like, ‘My gosh, what are we doing?’” Funk said.

The lockdown is taking another step toward changing. Grossklaus is heading up a committee of administrators and two representatives from each school beginning next week.

“If we are using that lockdown, what does that look like in our district?” Niebuhr said.

The trick is finding a procedure that is individualized between buildings but cohesive as a district. Evacuation from a one-story school is going to look different than from a two-story school. Each school has its own floor plan. Do teachers know what these buildings look like? Niebuhr asked.

Do they know where the exits are?

Nevertheless, from one building to the next, Grossklaus said people still need to have a sense of how to react.

“Let’s make sure we’re all on the same page so that if you walked into any building” — if you’re there for a meeting, perhaps, or, as Niebuhr said, a student transfers schools — “you would know what to do,” Grossklaus said.

After the committee has made decisions regarding the district’s implementation of ALICE, it will be taken to the students. Realistically, Grossklaus said, everybody will be up to speed by the start of next school year.

Niebuhr said the district has purchased books and videos for different age levels to instigate critical thinking and discussions.

Preventing the next school shooting

According to the Sheriff’s Office, limited access to schools during the day and accurate threat assessments of individuals who show signs of wanting to perpetrate violent acts are important to combat school shootings.

Freitag noted in a number of previous school shootings, family members, friends and coworkers witnessed signs of possible violence from shooters but did not call authorities.

“If they see it, they have to let someone know,” he said.

Winkels said though any gun legislation will probably be divisive, there needs to be an open debate to find the best solution so more mass shootings do not occur.

At the school level, Niebuhr said, educating using ALICE is both proactive and reactive.

“The point is to start thinking about all these things,” she said.

It’s a different place to be at than what Grossklaus said he remembers from school: hiding under a desk.

“That’s just not how we react anymore,” Grossklaus said.

‘Meeting a standard is where we want all kids…