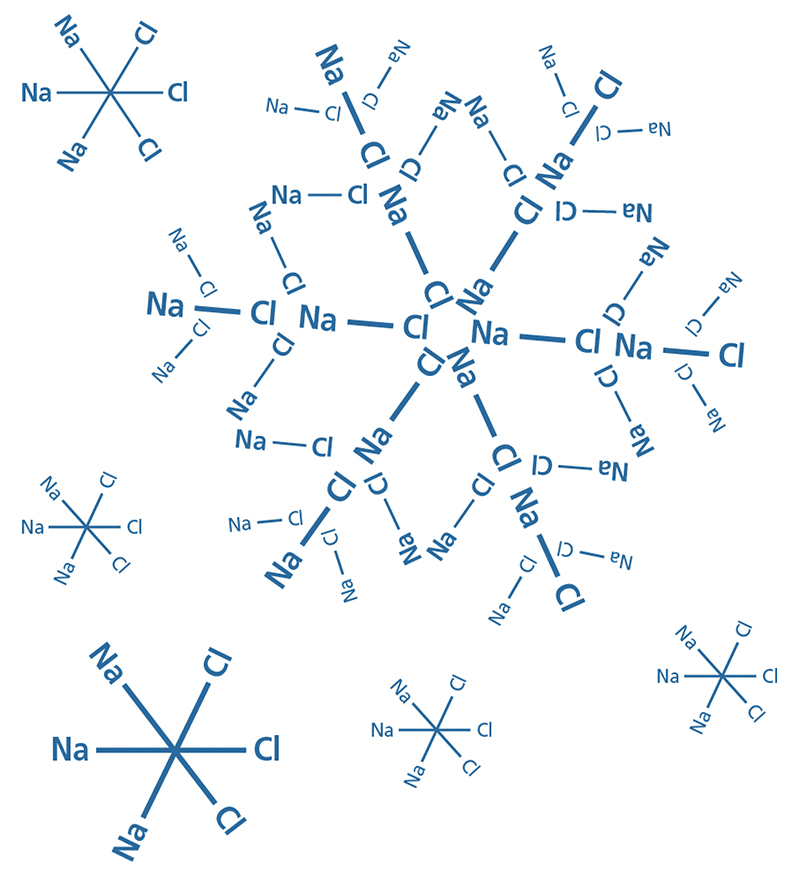 NA — CL Is a notation for the chemical composition of salt. The Minnesota Pollution Control Agency has contracted Fortin Consulting to conduct a training session Wednesday in Albert Lea on environmental practices for salting and sanding streets and sidewalks during the winter. - Illustration by Sarah Kocher/Albert Lea Tribune

Before a snow or ice event, the city street superintendent is on Twitter.

“The street department snow plows will be starting at 2am tomorrow morning,” @cityofalbertlea tweeted at 7:17 p.m. Feb. 24. “Please use off street parking if available. Thank you.”

On Wednesday, the superintendent and the city’s team of winter maintenance truck and plow drivers will join staff from the cities of Austin and Blue Earth and Freeborn and Steele counties to discuss winter maintenance strategies, specifically ones associated with salting. The “Smart Salting” one-day training, hosted by the Shell Rock River Watershed District, is funded by the Minnesota Pollution Control Agency through a grant from the U.S. Environmental Protection Agency and contracted out to Minnesota company Fortin Consulting.

Fortin Consulting founder Connie Fortin said it is not legally required for city and county employees to be certified in winter maintenance. However, Albert Lea Street Superintendent Scott Overland said all of his drivers responsible for plowing, sanding and salting Albert Lea streets were already certified on snow and ice control best practices in 2008. This course will be a refresher for those drivers and for Overland.

“It gives the drivers an awareness they have an effect on what they’re doing,” Overland said. 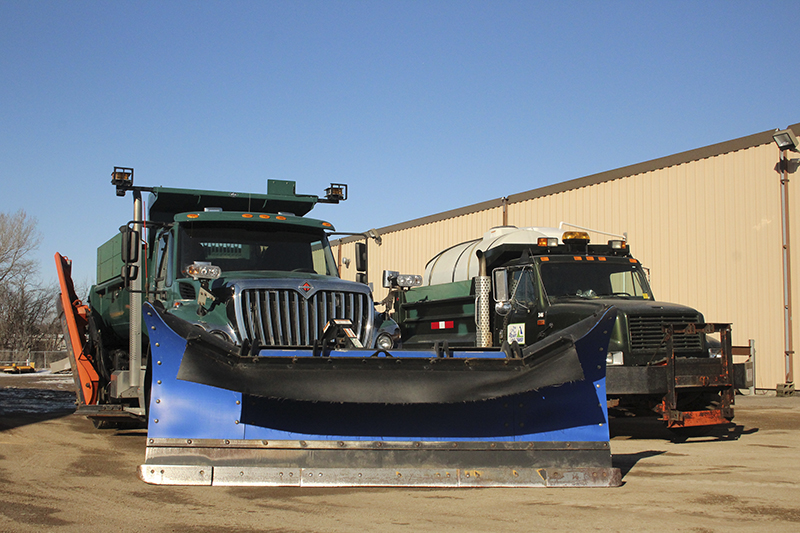 The city has 11 larger trucks it uses for winter street maintenance. It also has pickups that can service narrower streets. – Sarah Kocher/Albert Lea Tribune

Freeborn County truck and motor grader drivers have not been certified in Fortin’s, and therefore the MPCA’s “Smart Salting” training. Freeborn County Director of Public Works Sue Miller said the county’s drivers have been trained in other ways, through a local technical assistance program as well as with specific vendors on things like the calibration of spinners and augers used to disperse salt and sand, ensuring the drivers have a good readout on what each truck is putting down. The goal? Curb salt and sand use as much as safely possible.

“Sand ends up being sediments in our stands and our ditches,” Miller said. “Salt ends up creating salinity in our waterways. … We want to be as judicious with those materials as we can.”

There is a group of county employees planning to attend. Whether or not they make it, of course, is dependent on the weather, Miller said. They might be out plowing.

According to the MPCA, it takes one teaspoon of road salt to permanently pollute five gallons of water.

“In Minnesota, any salt that we use is going to end up in our water,” Fortin said.

Chloride is a new pollutant on the radar screen and not very commonly monitored yet, Fortin said. It’s considered a permanent pollutant.

“The salt, once it’s applied, we can’t ever recover it,” she said.

Currently, the nation’s standard for drinking water caps out at 250 mg of chloride per liter: that’s the EPA’s recommended benchmark for too salty for consumption based on taste and drinkability. 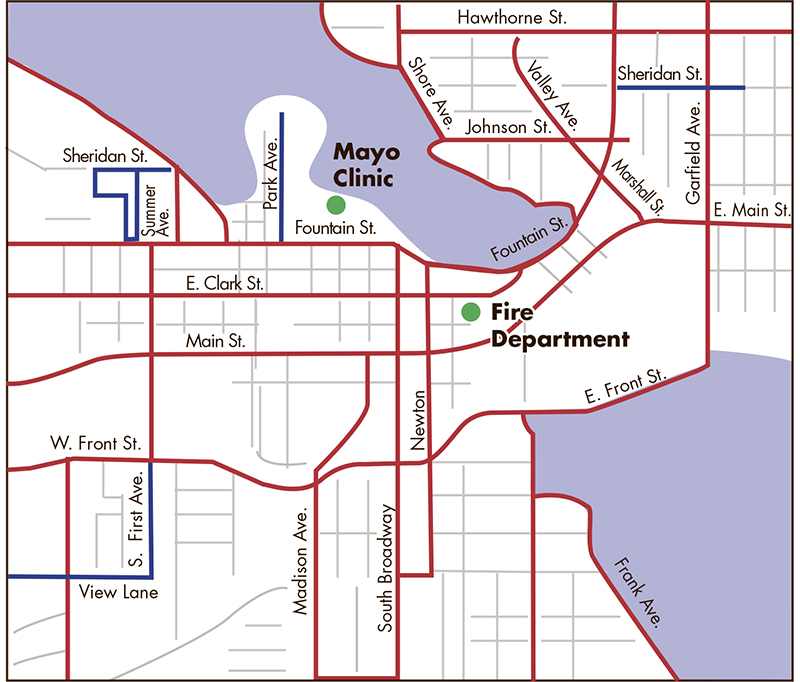 In this portion of the city street department’s overall maintenance plan, roads highlighted in red are top priority, and roads highlighted in blue are also of high priority on school days. On days of heavy snowfall, the red and blue roads will be hit first, with gray roads cared for after the critical streets have been cleared. Albert Lea Street Superintendent Scott Overland said the roads chosen as a higher priority mean anyone within Albert Lea should be able to access a plowed road within a few blocks. – Graphic by Kathy Johnson/Albert Lea Tribune

City and county employees currently use salt in various forms to treat roads before and during snow and ice events. Within the field of winter maintenance, Overland said the advances are occuring in available technology and in forecasting.

“Equipment and training are the two factors that are most dependent that are probably going to get you results,” he said.

Overland gets an Albert Lea-specific weather forecast three times a day, which he uses to make decisions about how and when to treat city roads.

When all the vehicles are parked in the city garage, it looks like a scene out of a supersized child’s sandbox. The city uses 11 trucks for plowing, sanding and salting. (The county uses ten.) The majority serve several purposes: There are plowing, salting, sanding and brining capabilities, all in one vehicle.

All of the city’s salt is contracted six months in advance. He is required to purchase 80 percent of what he contracts for. In 2004, Overland said city contracted for 1,200 tons of salt, which gets delivered in batches. In 2017, he contracted for 550.

“Our salt usage has dropped in half because of that brine,” Overland said, adding that other factors in that drop also include equipment and training.

Fortin said there are several possibilities for liquid deicers, but the most popular is rock salt and water combined, with approximately 23 percent salt included. The ideal, Overland said, is 23.3. The city garage has a brine maker with a buyonacy tester that measures the brine’s salt content. It looks a bit like a cross between a thermometer and a turkey baster, with percentages like ladder rungs climbing their way up the side of the tester.

The county also uses brine in saddle tanks attached to the sides of trucks. Both Miller and Overland said applying brine to salt and sand helps the solids stay in place. There’s less chance of it being blown off by wind or traffic, Miller said, and Overland said the salt starts acting more quickly when wet.

Both the city and the county also mix some salt into their sand — Miller said the county’s sand/salt mix is 10-15 percent salt. According to Overland, because sand naturally houses some moisture, salt helps keep the pile from freezing. It also provides texture.

“Brine is way easier to meter,” Overland said. Although the city does have two smaller spreading augers it uses specifically for salt because it can disperse the product more meticulously, it is still not as controlled as the liquid dispensers.

The brine comes out of a series of outlets lined up along the back of a truck, and there are three nozzle options for each outlet point. A white nozzle provides the most release. Red nozzles apply very little product. Blue is right in the middle, and it is the standard nozzle for the city’s use, Overland said.

But it’s not foolproof. If there is more than 1/10 of an inch of rain, the brine washes off. With a heavier freezing rain applying standard granular salt will be more effective, Overland said. 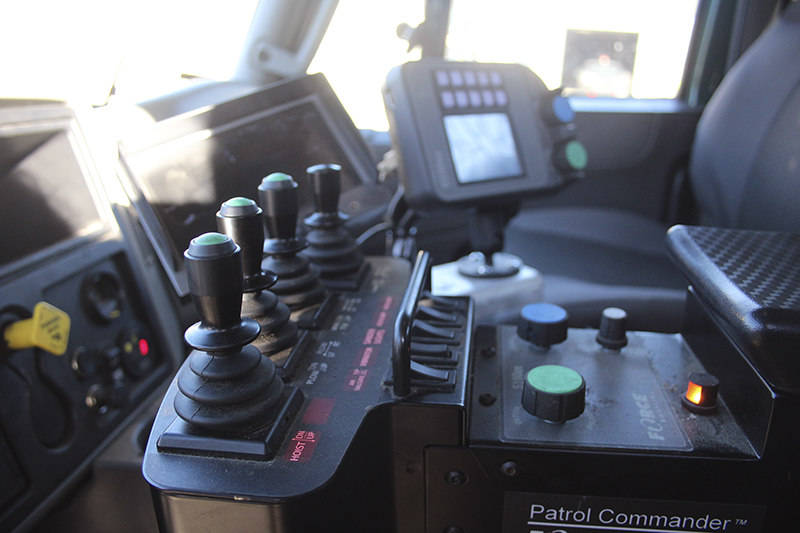 Inside one of the city’s plows is a set of controls and monitors for the brine distributors, the road temperature, the air temperature and three different plows: a front plow, a wing plow and a belly plow. – Sarah Kocher/Albert Lea Tribune

Each of the ingredients is part of a larger system riddled with variables. When deciding how to best treat roads for an inclement weather event in the winter, Overland said he considers air temperature, road temperature, the temperature before, during and after a storm and whether or not the sun will come out afterward. Miller added to the list: how much wind is involved, how wet the snow is forecasted to be, and whether it will be freezing rain or snow.

“We look at all of that and then formulate a game plan on how we want to attack that particular event,” Miller said.

Overland monitors the streets by driving them, especially for ice events.

“The more you can wait, the better you are,” he said. The closer to the event, the less chance product has of being moved off the streets. For freezing rain, he tries to time it so the workers will be salting while the rain is dropping but before it starts to freeze.

If it looks to be a particularly nasty storm, Overland said he will look at the forecasting service the city gets as well as three or four other forecasts, working to come up with a reasonable average for when the event will hit, how many drivers he should call and when the plows should start (this is when Overland takes to Twitter).

Overland and Miller have to consider their staffs, too. Both the city and county have one shift of drivers. A typical shift with the county is 5 a.m. to 5 p.m., Miller said.

“That’s a pretty long day in the seat for those guys,” she said.

A shift for the city usually starts at 2 a.m. It takes about eight hours to plow a typical snowfall, Overland said. In the driver’s seat of one of the most equipped trucks, the worker has a set of four toggles for the plow, ten identical white buttons for the brine distributors, a reader for the air temperature, a separate reader for the road temperature and a camera to observe the 9-foot wing plow attached to the truck’s side — in addition to the standard vehicular controls. When they’re plowing, they are also sanding intersections, Overland said. 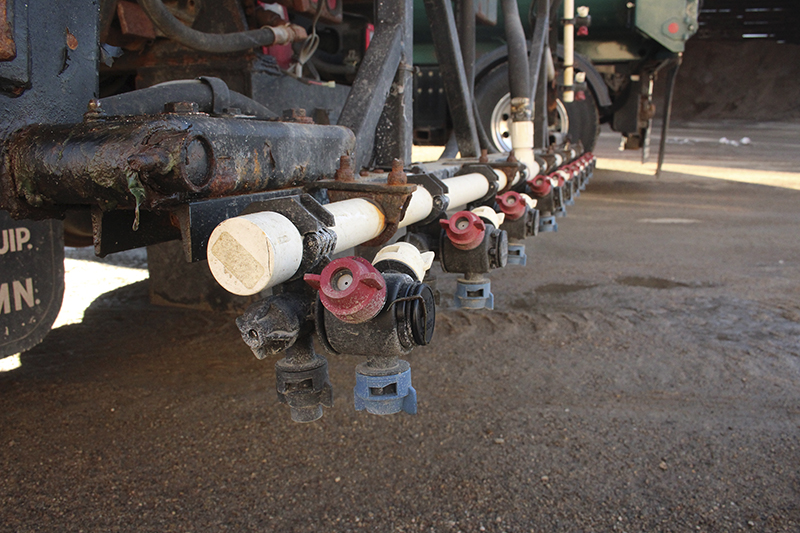 Each nozzle puts out a different level of brine on the streets. Red nozzles put out the least, blue sits in the middle and is the most commonly used by the Albert Lea street department, and white puts down the most product. – Sarah Kocher/Albert Lea Tribune

Take it to the streets

In normal snow events, the city team doesn’t use much salt, Overland said. It’s the ice events that require more, and he’s noticed these ice events are where weather has been trending. Overland does measure his salt and sand usage from year to year, but he said he can’t read much into it.

“That’s the hard part, is because it’s so weather-dependent, you can be the best, most, most weather-conscious person in the world, but what Mother Nature gives you, if they give you a bunch of icing events out of my control, that’s going to burn up more salt,” Overland said.

The city and county also use plows to clear up as much as possible. Miller said if the county can do a job mechanically, without using any product, it is usually both more cost-effective and better for the environment.

But there’s another consideration in the mix, too.

“At the end of the day, public safety comes first,” she said.

Educating maintenance professionals on efficient use of salt is just one piece of the bigger puzzle for Fortin. It slows down the problem of salty water, but it doesn’t solve it. Less salt in the water is still salt in the water.

Fortin said she hopes awareness will encourage people to take pressure off of public works.

“They are just delivering the product people are asking for,” she said. “Really, we’ve got to help them be successful and not be so demanding.” 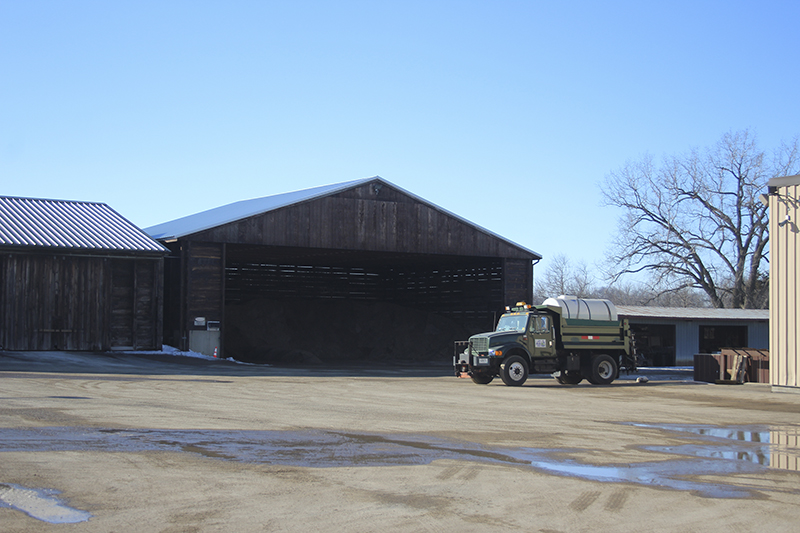 This truck holds 1,300 gallons of brine, which the Albert Lea street superintendent said holds 1,300 gallons. Within one day of use, the tank will be filled twice. In this photo, it sits in front of the open storage for the city’s sand mix, which is to the left of the closed salt storage. – Sarah Kocher/Albert Lea Tribune