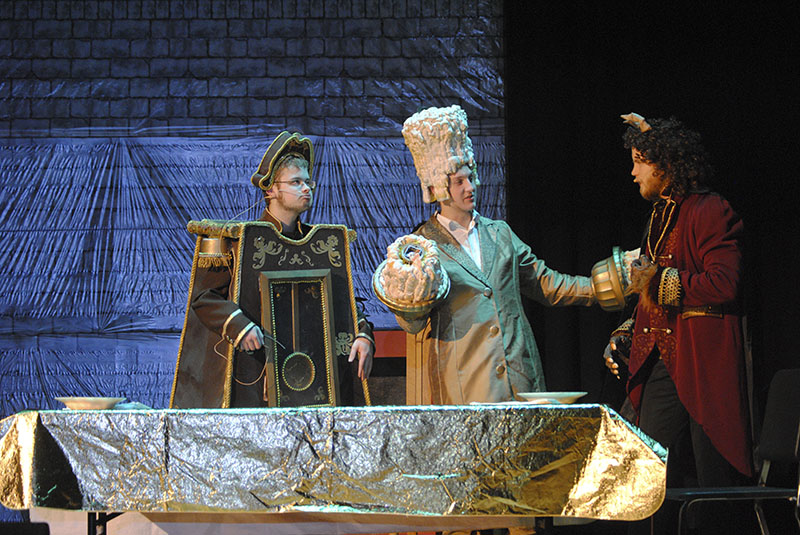 Alden-Conger students will be tackling a tale as old as time — or at least, a tale older than them — for their spring play.

“This is part of, you know, the high school-aged kids, their childhood,” director Ada Theusch said of the upcoming play “Beauty and the Beast.”

Senior Tirzah Larson said familiarity with the play has helped the cast find their roles.

“We know the movie, so it’s not as hard to transfer over,” Larson said. Larson will be playing Mrs. Potts. She is using the animated movie as a baseline and adding her own twist.

Donovan Olson said he is not straying from the movie portrayal of his character.

“I feel like I’m a carbon-copy LeFou,” he said. 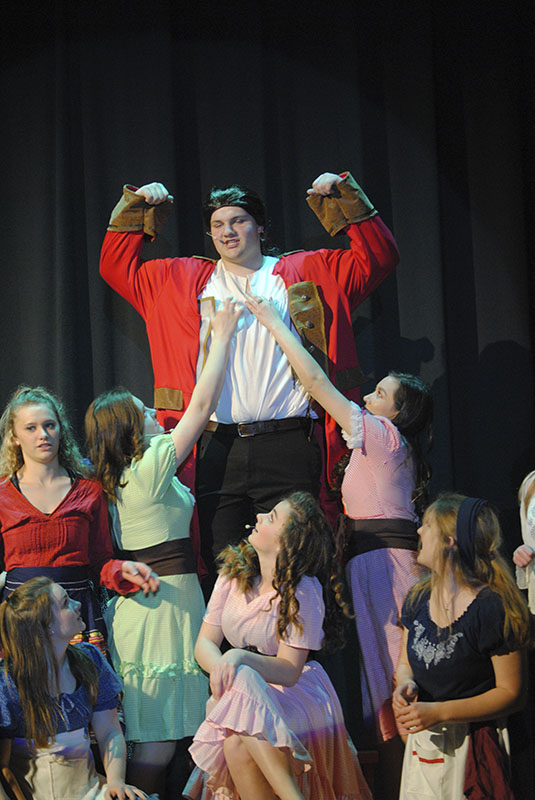 Gaston, played by Trevor Kuethe,” shows off his muscles while rehearsing a scene in “Beauty and the Beast” at Alden-Conger Public School. Provided

For Trevor Kuethe, the play will be a chance to see the best of both worlds: the movie and Alden-Conger’s students.

“The audience knows, like, who we are as people, but then I feel like they know who the movie characters are, too, and I think they’re going to like how we mix the two,” Kuethe said.

But despite the familiarity, there are noted differences for the cast. The scenes are long, Larson said. Senior Ian Olson, who plays the Beast, said the Beast rarely sings in the animated movie. In the musical version, which is what Alden-Conger will be performing, he has a handful of solos. The choreography can be tricky, and the scenery transitions and scenes themselves can be a lot different than the animated movie, senior Brett Neel said.

All that, and senior Chris Martens is playing a candelabra.

“It’s very hard to do physical acting when you’re restricted to not having hands,” he said.

The costumes have been a challenge, Theusch said.

“They’re not traditional costumes,” she said. “They’re objects. It’s not like costuming a person in regular clothes.”

Nonetheless, she said the costumes will be a draw for the audience.

“I think they will be delighted with the imaginative costumes,” she said. “They’ll be thrilled to see the big groups working together.”

It’s a group studded with some new actors. Theusch has seen this before with some of the more recognizable plays, such as when the school performed “Annie.”

“It seems like if students know the show, they’re more likely to try out,” she said — including high school students.

Mikenna Erickson, who plays Belle, is not a new actress, but Theusch said this is her first major role.

“She’s really kind of come into her own,” Theusch said. “She’s made the role her own, too.”

Erickson said the cast has created a good atmosphere during rehearsal. Students are enjoying themselves — with or without hands.

“I feel like this is definitely one of the most fun plays we’ve ever done,” Martens said.

“Beauty and the Beast” will run in the Alden-Conger High School gymnasium at 7 p.m. Friday and Saturday and 2 p.m. Sunday. Tickets are available at the door for $6 for adults or $4 for students.