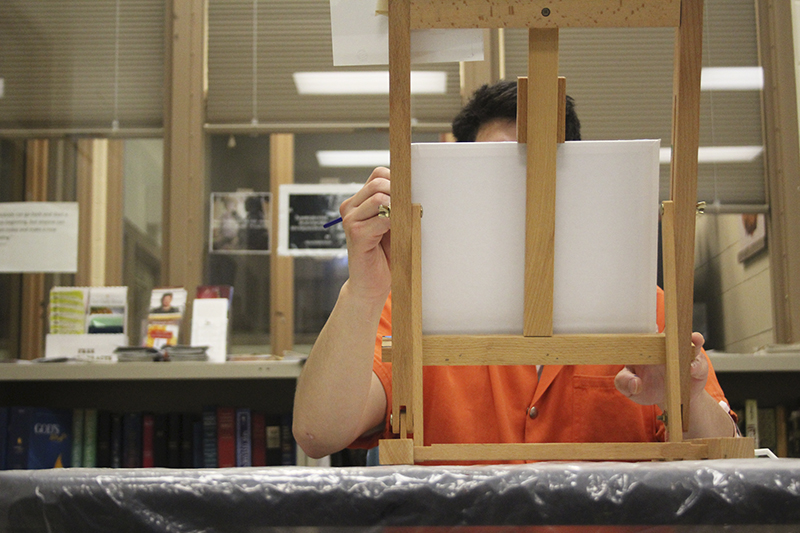 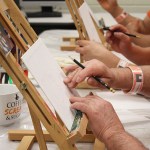 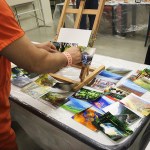 At the start of class, a detainee looks for inspiration. Sarah Kocher/Albert Lea Tribune 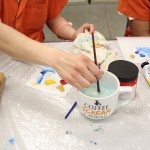 A detainee cleans off his brush as he works on his painting Wednesday morning. Sarah Kocher/Albert Lea Tribune 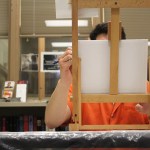 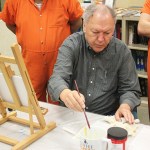 Jim Dalton starts off the painting for one of the students in his art class. Dalton said he tries to spend around five minutes teaching and the rest of the 2 1/2-hour class letting attendees paint. Sarah Kocher/Albert Lea Tribune 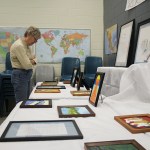 A member of the Albert Lea Art Center takes in pieces on display at the Freeborn County jail’s art show for detainees on March 2. The pieces were later given to the Art Center to display in their gallery. Sarah Kocher/Albert Lea Tribune 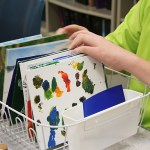 A returning member of the class looks through some previously done painting for work he had done in an earlier class. Sarah Kocher/Albert Lea Tribune 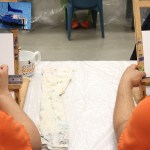 The Freeborn County jail has a constant rotation of in-house artists.

Once a week since the fall, the jail’s program room is converted into a painting studio. On Wednesday, the tables were covered with clear plastic sheets lightly dappled with a few spots of paint. Every week, there are six spaces for detainees to attend a 2 1/2-hour art class with volunteer Jim Dalton. That’s about all that will fit in the space.

Several pieces created by members of Dalton’s class will be on display at the Albert Lea Art Center. The show, “On Both Sides of the Bars,” opens at 1 p.m. Sunday.

“It’s open to everybody and everybody’s art,” she said of the Art Center.

The show will also include pieces of creative writing created in another program at the jail, led by Carolyn Smith and Carolina Pena. These programs are two of approximately 20 programs that come and go, Coombs said.

Members in Dalton’s painting class use 8-by-10 canvases for their work. Oftentimes, they won’t be in class enough times to finish something bigger.

“The turnover is so high, every week there’s someone new,” Coombs said.

One of the pieces in the show, a large pencil drawing of a cross with two birds holding a banner, was created by four people as the artists came and left. Dalton said he likes it when people attend his classes more than once because it means he can watch them make progress in their works. But because he most often has students one time only, he said he tries to focus on three things: light, shadow and contrast.

On Wednesday, the class followed what Dalton said is his usual format: a few minutes of instruction, and then the rest of the time is reserved for painting. Many of the detainees haven’t painted before Dalton’s class, he said, although several of his past students have been skilled pencil artists.

“A lot of these pictures are just the first hour and a half, two hours that they’ve painted,” Dalton said.

It’s a fixed space, so Dalton brings the inspiration to his students. Several of the pieces in the show are carbon copies: paintings of paintings Dalton himself did and brought in for his students to see. There are also several pieces with a grouping of fall gourds from a set Dalton brought in for a still life. On Wednesday, detainees comb through some photos from Dalton’s vacations.

Dalton said he is not an art teacher by trade — he has a background in corrections.

He’s also sharing a closet with the other programs the jail puts on. Supplying the program has been a challenge, Coombs said.

“Our budget is incredibly tight,” she said. They have purchased supplies a few times and have also received some donations. Art, Coombs said, is not a cheap hobby. She is in the process of creating a wish list with donatable items for the jail’s programming.

On March 2, members of the Albert Lea Art Center attended the Freeborn County jail’s art show — the inside version. Before groups of detainees came to view the art some of their predecessors made, jail administrator Mike Stasko joined the group to talk about the program and its impact within the jail.

“I think it’s a good way for the guys to relax a little bit,” Stasko said to Art Center members.

Coombs said she has noticed when detainees are kept busy with positive activity, she sees fewer behavioral issues.

“Art has always been known as something very healing,” Coombs said.

Furthermore, it’s an activity that hasn’t met major barriers due to language differences.

“There’s no language,” Coombs said. “Art is every language.”

So next Wednesday, the brushes will come out again.

What: “On Both Sides of the Bars” art show