Commissioner Lee: A life of service to community 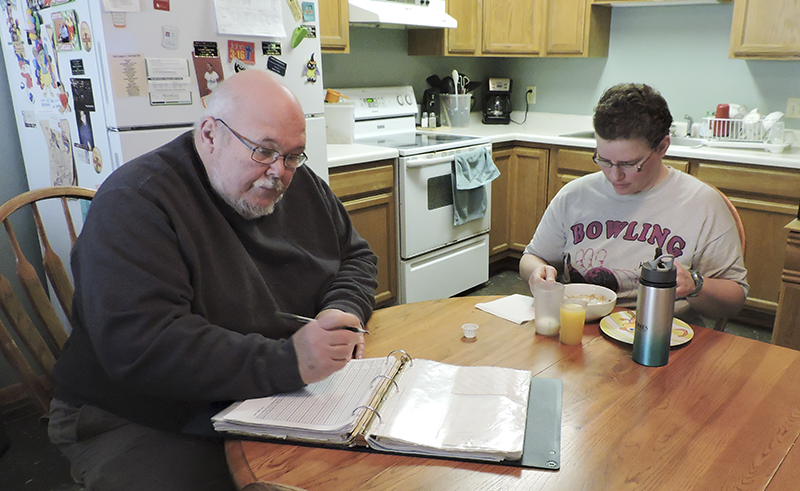 Mike Lee talks with Pauline Camerer while she eats breakfast and he goes over his daily paperwork. - Kelly Wassenberg/Albert Lea Tribune

So much of what people experience in their youngest, most formative years can dramatically impact their lives in the years to come. Freeborn County Commissioner Mike Lee is a testament to that.

Lee, 62, vaguely remembers the experience of having two great-aunts, Tia and Ella Reindal, briefly live with his family when he was a young child. He said Tia Reindal did not speak, and Ella Reindal was her sister’s keeper. They both passed away in the ‘60s, but Lee recalls how the two were inseparable and doesn’t think Ella Reindal had any other job outside of being her sister’s caregiver.

When asked, he admits the memory of those two sisters may have been the reason he’s always wanted to be in a position to help others and may have very well been the catalyst behind his job now as an afternoon and nighttime residential instructor with Elm Homes of Waseca County — where he aids four of the company’s consumers in living as independently as possible in a residential setting.

Lee started working with the organization in 2003. In the beginning, he worked at a home with four men in Armstrong. In 2008, he switched to a home in Albert Lea so he could be closer to home. He now works with four women who range in ages from their 40s to 50s.

His job is quite simple to explain — he supervises, he serves, he protects and he teaches.

Lee works to make sure those who live at the group home are safe and properly cared for. He aids them in daily living skills, such as cooking, cleaning, budgeting and medication administration. Sometimes this means merely supervising; sometimes they need assistance. 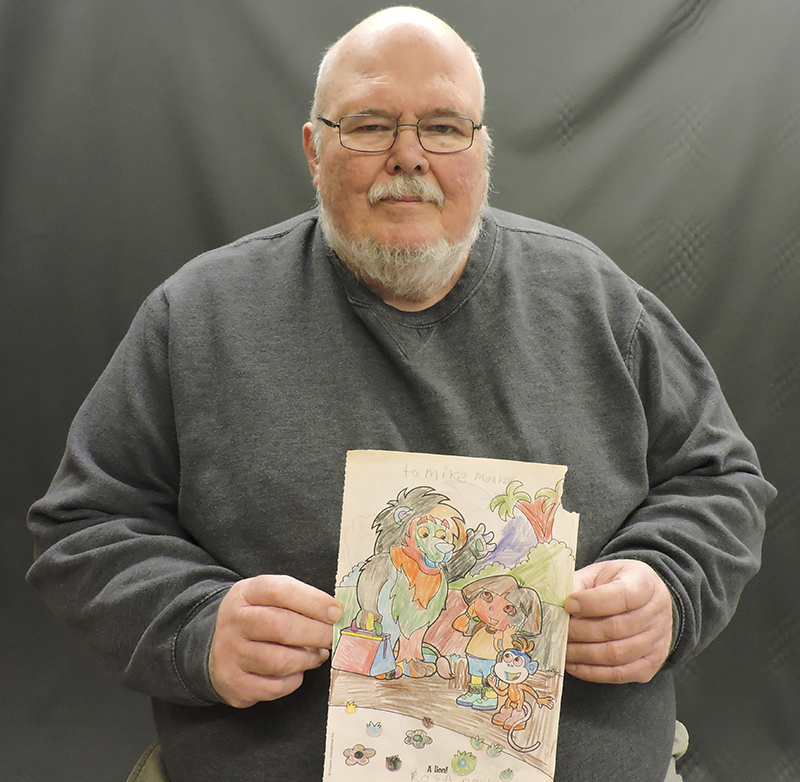 Freeborn County Commissioner Mike Lee, who also works with Elm Homes of Waseca County, holds up a piece of artwork gifted to him by one of the women her serves. – Kelly Wassenberg/Albert Lea Tribune

He makes sure the women are properly dressed for the weather conditions and escorts them to outings in the community, such as going to the movies or on a shopping trip. Lee talks with them and gives them guidance and support by trying to relate to their problems and tries his best to help them work through them.

Pauline Camerer, one of the people Lee serves, said Lee is a father-figure to her, which means a lot, as she lost her own father 20 years ago.

That’s a role Lee is happy to take on.

“I really enjoy it,” Lee said, noting the joy comes from watching the women, who have cognitive disabilities, progress through learning new skills until they’ve reached mastery and they can move on to the next goal.

Lee has been a Freeborn County Commissioner since 2011. He has been married for 40 years to his wife, Renee, who is a special education teacher at Halverson Elementary School.

The couple have four children and six grandchildren.