Funeral services for Henry Clotfelter will be at 11 a.m. Saturday at Grace Lutheran Church in Albert Lea with visitation one hour prior to the service. The Rev. Shane Koepke will officiate. Interment will be at Graceland Cemetery in Albert Lea. 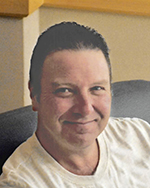 Henry was born Feb. 17, 1963, at Offutt Air Force Base in Bellevue, Nebraska. He grew up in Omaha, Nebraska, enjoying time with family and many friends. He knew how to have a good time, and was often the life of the party while cruising around in his fast cars and trucks. Henry worked for Gamco since 1982, working his way up from sweeping floors and running forklifts before running a plant on his own, Gamtec, in Albert Lea for many years.

As he got older, gatherings with family and friends were his favorite. He had many hobbies, including boating, skiing, landscaping, decorating, carpentry, working on cars, sports — especially the Nebraska Huskers — dancing and music. He was a fabulous storyteller, and always would draw people near. Over the last few years he was dedicated to faith and love. He will be missed by many.

Henry was preceded in death by his parents; grandparents; sister, Sara; and grandson, Easton.