Judge rules Wetterling documents must go back to FBI 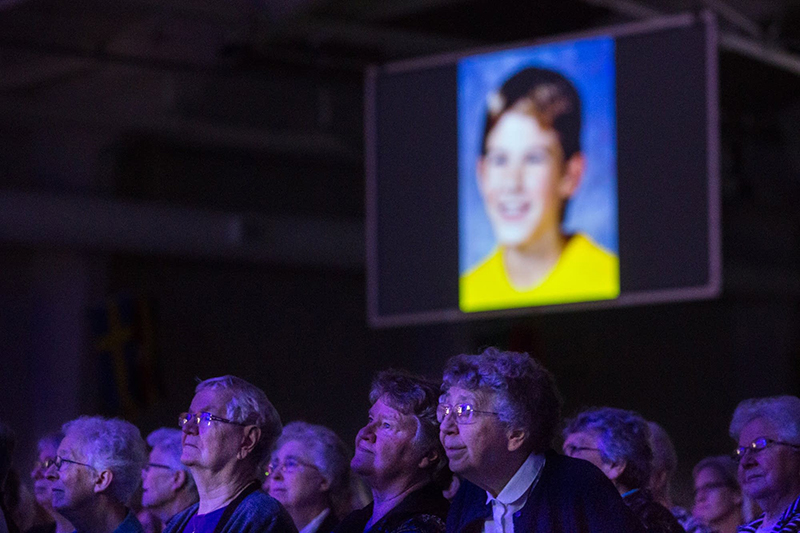 Those attending Jacob Wetterling’s memorial service listen during a slideshow of photos of Jacob and his family Sept. 25, 2016, in Clemens Fieldhouse at the College of Saint Benedict in St. Joseph. - Evan Frost/MPR News

A Stearns County judge has ruled that a portion of contested files in the Jacob Wetterling investigation must be returned to the FBI. The agency can then decide whether to make them public.

But Jacob’s parents Patty and Jerry Wetterling filed a lawsuit to stop the release of 168 pages — including some created by the FBI — because they contain personal information.

Seven media organizations, including MPR News, joined the suit, saying all the documents should be made public. Then the FBI got involved, saying it wanted thousands of its investigative files returned to the agency. Now, a Stearns County judge has ruled in favor of the FBI, saying the documents are subject to federal law.

Douglas Kelley, an attorney for the Wetterlings, said the 168 pages the family wants kept private amount to 22 separate investigation documents.

“The court’s ruling says of the 22, 15 of those documents will go back to the FBI, so that means that we are down to the wrangling of just seven documents out of all the entire file,” Kelley said. “And I think that’s very heartening and I think it’s good news for the Wetterlings.”

Kelley said the district court still has to rule on those seven documents.

The high profile Wetterling investigation dragged on for nearly three decades and the Wetterlings only learned of Jacob’s fate in fall 2016.

The media organizations’ attorney, Mark Anfinson, said the public has a right to know what’s in the documents.

“The ability of the news organizations and the citizens of Minnesota to really understand what happened in that investigations is going to be significantly diminished, I think,” Anfinson said. “That’s unfortunate, and the FBI has never explained why they need to cause that impact. I think that’s the big issue here.”

Anfinson said he’s not sure yet whether the media organizations will appeal the decision on the FBI files.

An FBI spokesperson declined to comment on the case, but did say the documents would be subject to the federal Freedom of Information act.

However, Kelley said federal law will be more friendly to the Wetterlings’ requests.

“There is a recognized safety valve for a right of privacy, so we will then make a request to the FBI to say of those 15 documents that came back, which we had previously asked not to be released, we will ask them to make that determination,” Kelley said.

Meanwhile, the case continues in the Stearns County court, with the next hearing slated for April 10.