Man allegedly rams another vehicle, gets stuck in ditch 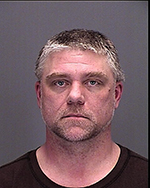 According to the court complaint, Mower County deputies responded to a call at 9:37 p.m. Saturday to a residence in the 18000 block of 536th Avenue.  A woman at the residence said she was driving home from work when she noticed the vehicle behind her was so close that she could not see its headlights. After turning onto 180th Street, the vehicle behind her accelerated and rammed into her vehicle twice. When she got to the residence, she quickly pulled into the garage and saw the other vehicle stop at the end of the driveway. She closed the door and did not leave her vehicle until she was sure the driver of the other vehicle could not get in. She then went inside and told family members to call 911.

They heard a knock on the door, according to the complaint. When a resident answered it, Clark was standing on the front porch. He said his van was stuck, and he needed some help. He was allegedly slurring his speech, but not acting aggressive. Clark’s van was stuck in a ditch just off the driveway.

A deputy observed tire tracks that indicated the van had pulled into the driveway and reversed as a high rate of speed, causing it to spin and slide into the ditch, according to the complaint. Contact points on Clark’s van allegedly matched the damage on the victim’s vehicle.

Another deputy located Clark, who was stumbling and trying to get away, about 100 yards south of the van, according to the complaint. Clark allegedly told the deputy, “I got stuck back there trying to turn around.” A breath test issued to Clark allegedly showed a result of 0.258. Two residents of the house identified Clark as the man who came to the front door after the victim came inside.

The woman complained of neck and back pain, according to the complaint.

While at the Mower County Jail, Clark submitted to another breath test, which allegedly registered at 0.16.

A review of Clark’s criminal record shows prior convictions for drug possession and criminal vehicular operation-substantial bodily harm-under the influence of alcohol.

He will appear in court again April 10.