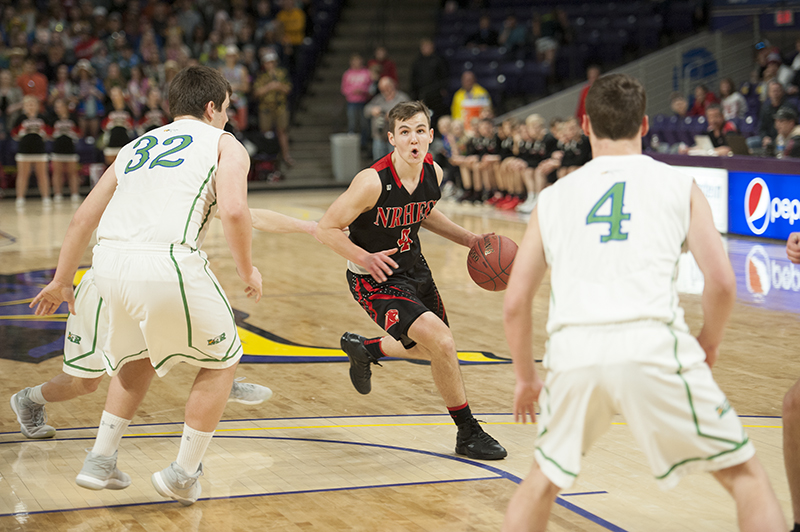 NRHEG senior Benji Lundberg keeps his eyes on the basket Monday night in the Section 2AA semifinal against Maple River. Lundberg would score 12 of the Panthers 20 first-half points and finish the game with 31 points. Tyler Julson/Albert Lea Tribune

MANKATO — The NRHEG boys’ basketball team saw its season come to an end at the hands of Maple River Monday night in the semifinal round of the Section 2AA playoffs. Despite leading the entire first half, and a big game from senior Benji Lundberg, the Panthers fell to the Eagles, 61-57.

The Panthers started out the game hot on offense, especially Lundberg. Lundberg would score 12 of the Panther’s first 16 points. However, after the first seven minutes of the game, the Panthers would be slowed on offense and scored just a few points throughout the rest of the opening half.

After getting out to an early lead, NRHEG would let Maple River climb its way back into the game after a couple of small runs from the Eagles. A small 6-0 run, followed by a 7-2 run four minutes later, put the Eagles right on the heels of the Panthers.

In a low-scoring first-half, the Panthers headed to the break with just a one-point lead, 20-19.

NRHEG was led in scoring in the first half by Lundberg with 12 points, junior Brady Agrimson had six and senior Jarret Utpadel had two. 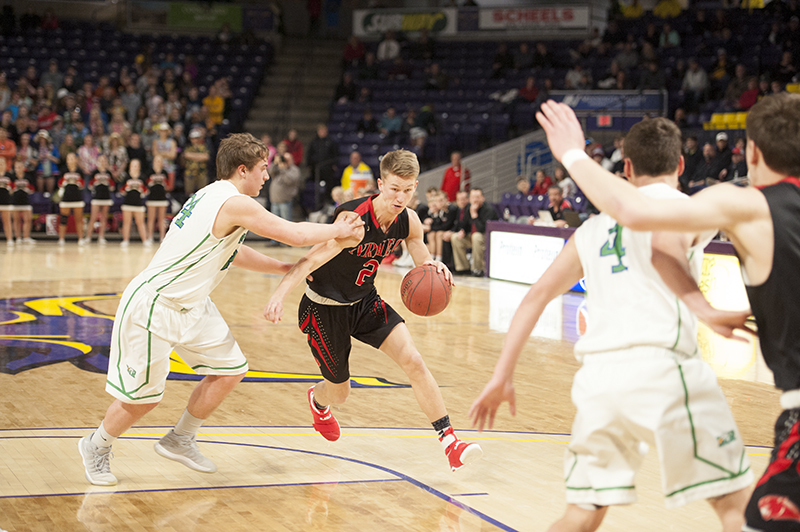 The Panthers started the second half with more slow offense and even found themselves trailing for the first time in the game.

Agrimson and Lundberg would trade baskets for the Panthers in the opening portion of the second half, as they scored the team’s first 11 points.

The game would go back and forth for much of the remainder of the game, until around the three-minute mark when Maple River started to pull away.

All of the momentum-swinging plays started to fall in favor of the Eagles, and the Panthers struggled to keep them off the free-throw line. With two minutes to play, the Panthers found themselves down by six and would need to make some big plays to keep their state playoff hopes alive.

They would give it a valiant effort, using a pair of threes from Utpadel and Lundberg, but the Eagles’ ability to convert from the free-throw line would keep them from ever regaining that lead.

Lundberg led the Panthers with an impressive 31 points, Agrimson finished with 15, Utpadel had seven, and senior Nathaniel Techau and junior Devin Buendorf each had two.

It was a tough loss for the Panthers who had won the consolation championship just one year ago.

NRHEG sees their season come to an end with a record of 24-4. They lose six seniors from this year’s squad as they look to continue their successes into next season.