Richard Leroy “Dick” Williamson of Albuquerque, New Mexico, passed away Sunday, Nov. 26, 2017, at the age of 84 while hospitalized. 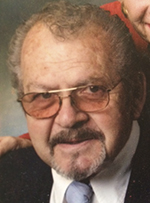 Dick was born May 12, 1933, in Glenville to Fannie Grace (Kral) and Earnest Williamson. He went to school in Glenville and Albert Lea.

He was united in marriage to Mary Nelson in 1963. They moved to Albuquerque with their young family in 1971. There he continued working in sales. He enjoyed buying, bargaining and selling, which he continued doing up to the last six months of his life.

Dick is survived by his wife, Mary; and three daughters, Susan Williamson of Albuquerque, Linda (Brian) Moore of Prescott, Arizona, and Kaleyne Almquist of Albert Lea.

He was preceded in death by his parents and his siblings Donald (Evelyn) Williamson of Glenville, Dayton and wife, Margaret Williamson, of Alexandria, Edward Williamson of Albert Lea and Marlys and husband, Donald Janssen, of Northwood; as well as several nephews.

His delightful story telling will be missed by his many loving nieces and nephews, and sisters-in-laws Evelyn Williamson and Janet Register.