Funeral services for Shirley A. Gunderson of Albert Lea will be at 10:30 a.m. Wednesday at First Presbyterian Church in Albert Lea. The Rev. Dwight Netzer will officiate. Interment will be in Graceland Cemetery. Visitation will be from 5 to 7 p.m. Tuesday at Bonnerup Funeral Service and one hour before services at the church. 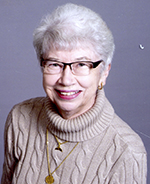 She married Wayne R. Gunderson on June 14, 1958, at First Presbyterian Church in Albert Lea, where she continued her membership.

Throughout her life she found much joy in the relationships she built during her career as a secretary and bookkeeper. She found employment at Federated Mutual in Owatonna, the ASCS office in Albert Lea, Consolidated Food and Wilson & Co. She later served as bookkeeper for Skyline Restaurant, as well as several other businesses in Skyline Mall.

Always active, Shirley was a member of Crossroads Camping Club and enjoyed camping for more than 50 years. Birthday Club, serving as a Halverson Elementary School homeroom mom and bowling league were also activities she enjoyed.

Traveling was a great passion she shared with Wayne. They traveled by car to 49 states and also visited Canada, Mexico and eastern Europe.

“Bubbi,” as Shirley was affectionately known, loved spending time with daughter, Patti, and her family.

She was preceded in death by her parents Edward and Anna Brabec; granddaughter, Angelina Jael Nardone; and in-laws Truman and Gladys Gunderson.