‘To inspire someone means to care’

The wall honors Josh Kuphal, a former Albert Lea High School graduate who died from spina bifida. It was started in 2004 by the Kuphal family in his honor. This year, the fifth and sixth tile holders were installed to accommodate more inductee tiles.

For the 14th year, Kuphal’s parents Brian and Kathy Kuphal were there to help congratulate inductees.

“It’s really been a great experience and the students have really embraced it, and that’s what makes it grow,” Brian Kuphal said.

After the Wall of Inspiration inductees were recognized, the assembly watched a video of each of the 10 members explaining the inspiration for the tiles they would contribute to the wall. Inductee Ethan Eriksmoen said for him, this was a reflection of being unashamedly himself.

“There’s just something about being able to express yourself, it just — it feels good,” he said.

Although it didn’t make the final cut for the tile, Eriksmoen’s stepmom, Brittany Eriksmoen, said he was considering including the quote, “If you stumble, just make it part of the dance.”

Instead, his tile has a pixelated graphic of Mario mid-jump and the words “Believe in Yourself,” with “Be You” emphasized in bold.

“He’s a really, he’s a completely different kid than when we moved down here two years ago,” Eriksmoen’s father, Ron Eriksmoen said. It was after they moved here that he broke out of his shell, Brittany Eriksmoen said.

Also recognized with a spot on the Wall of Inspiration this year is Dora Ogunkanbi, who was nominated for being strong, loud, independent and standing up for what she knows is right. 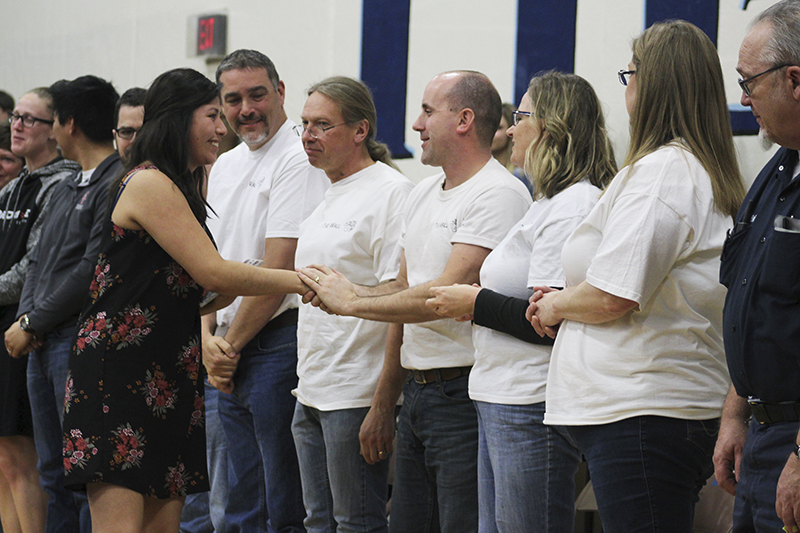 Brenda De Rosas shakes hands with Wall of Inspiration committee members after being recognized for “trying to find the best in people and learn from their worst” and for her attention to and care for the community’s students with special needs. – Sarah Kocher/Albert Lea Tribune

Ogunkanbi said the nomination was an affirmation of all the ways she has grown as a person and embraced her own perspectives.

“I might be the only person out of like, a thousand, but it’s still good to have a voice,” she said. “The only thing you have that’s, like, different from everyone else, other than your looks, is your voice. I just truly believe that one person’s voice can make a difference in the world.”

This year’s 10 Wall of Inspiration inductees include:

“Rowan treats everyone with kindness and is a natural leader, both in school and in the community, and is a great role model to her peers,” presenter Jim Haney read from a nomination letter for Kraft. Kraft is involved in dance team, choir, Key Club, Fellowship of Christian Athletes, environmental awareness club and National Honor Society, among others. She is inspired by her mom’s strength.

“No words can describe how much Ms. Netzer has taught me,” Haney read from a nomination letter. “She has not only taught me how to become a better writer, but she has taught me about life and how to get through it.” Netzer was also nominated for her kindness, humility and authenticity, Haney said. She has been teaching for 12 years, and is herself inspired by her students, her friends and fellow teachers, her parents, her dogs, her husband and Jesus’s message to love and serve.

Ogunkanbi was recognized on the Wall of Inspiration for her dedication to making positive change in the world.

“This is the kind of girl who is going to do whatever she can to make the world a better place,” said a nominating letter for Ogunkanbi. Ogunkanbi’s hobbies involve writing poems, watching movies and ’90s TV shows and political activism. She said she is inspired by making the most out of every day on earth.

In addition to her new place on the Wall of Inspiration, Hansen was also recognized previously as the 2000 Albert Lea Teacher of the Year, the 2007 Section 1AA Basketball Coach of the Year and has been inducted into the Austin Community College Hall of Fame.

“Anyone who knows Coach Hansen knows what a truly amazing person she is,” the nomination letter said. “I hope that one day, someone will look up to me the same way I look up to Coach Hansen.”

Hansen said she is inspired by her family, students, athletes, other coaches and colleagues.

De Rosas was recognized Friday for the maturity, courage, passion and personal character she demonstrates, a nomination said, as well as for her appreciation of and care for students with special needs.

“She loves spending time with special needs kids, who she believes are important members of our school community, even though they aren’t recognized as such,” a nomination said. De Rosas participates in tennis, mock trial, National Honor Society, the orchestra and serves as co-editor for the Alahasa, among other involvements. She said she takes inspiration from everything, but she is most inspired by her hard-working family, who she credits for shaping her into who she is now.

Alford’s inclusion in the Wall of Inspiration comes after six years of teaching. He is the assistant boys’ golf coach and a current candidate for Albert Lea Teacher of the Year.

“When I want to give up on my schoolwork, he continues to push me to keep working hard,” a nomination letter said. “He encourages me to achieve my goals and to do what is best. Steve always has a positive attitude; he makes me laugh and smile every time I’m around him.”

Alford said he is inspired by ordinary people who are selfless, authentic, who make a difference and who are not afraid of failure. 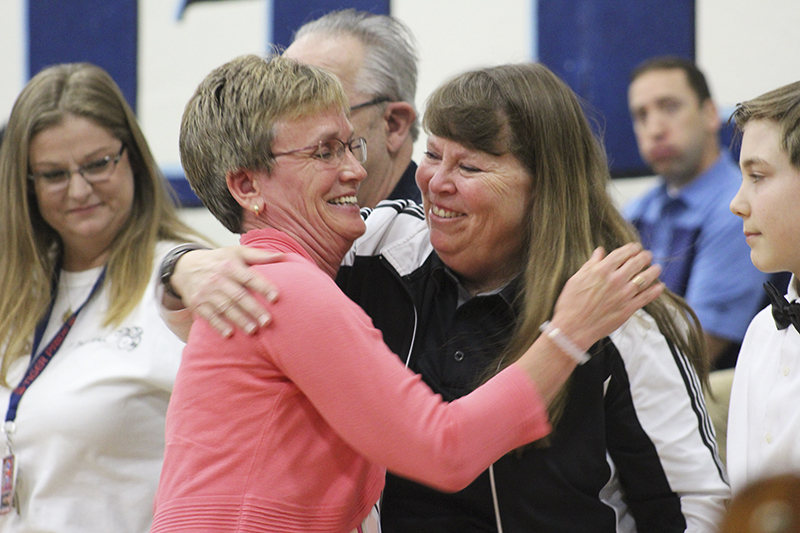 Karol Hansen, a teacher and basketball coach, hugs a member of the Wall of Inspiration committee while being recognized for the positive and supportive attitude she displays to her students and athletes. – Sarah Kocher/Albert Lea Tribune

“There are a select few people who stay in your life and impact you positively in each and every moment you are with them,” a nomination letter for Eriksmoen said. “ He has helped me become the me I’ve always wanted to be.”

Eriksmoen is involved in choir and theater. He enjoys drawing, singing, dancing, video games and acting, and sees himself on Broadway or acting in a movie. He said he is inspired by singing and cartoons (especially Mario).

Christian Talamantes graduated from Albert Lea High School in 2017 and is in his first year at Riverland Community College in the electrician program. His nomination noted that Talamantes became laser-focused on his schoolwork when he found out he was going to be a father, which his father, Jacob Talamantes, said happened when his son was 16.

“It would have been very easy for him to give up … but he didn’t,” said the nomination Haney read at the ceremony. “He chose to work harder, ignore the naysayers and to make something of himself. The obstacles that he has overcome and the dedication that he has to his family, his education and to bettering himself is an inspiration.”

After shaking the hands of the committee members, Talamantes received a hug from his father, Jacob Talamantes.

“I think a lot of people can be inspired by him,” Jacob Talamantes said. “I know I am.”

“I could tell that Romario had something special,” Haney read from the nomination for Rosas. “He was kind to all the classmates, always respectful to his teachers and was driven to succeed in school. I will see Romario taking the time to help other classmates with their schoolwork.”

Rosas will be the 2018 captain of the cross country team. He volunteer at Night to Shine, plays in band and is involved in the chess club.

Rosas said he is inspired by his family and friends.

Huerta-Ortiz was the event’s final inductee to the Wall of Inspiration. According to his nominator, Huerta-Ortiz inspires people everywhere he goes.

“I’ve never seen anyone that got along with so many different kinds of people,” the nomination said. “He seems to know and like everyone, and they all know and like him.”

Huerta-Ortiz is involved in robotics, tennis, National Honor Society and the chess club, in addition to other groups.

According to Haney, the hope is that one day, the tiles will cover the entire commons wall.

“To inspire someone means to care,” he said at the ceremony. “Each and every one of you in this gymnasium inspires your peers and teachers without even knowing it.” 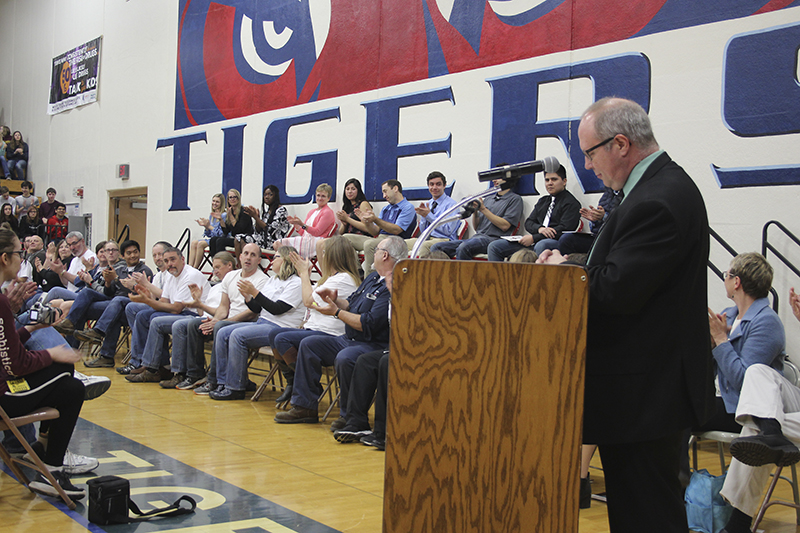