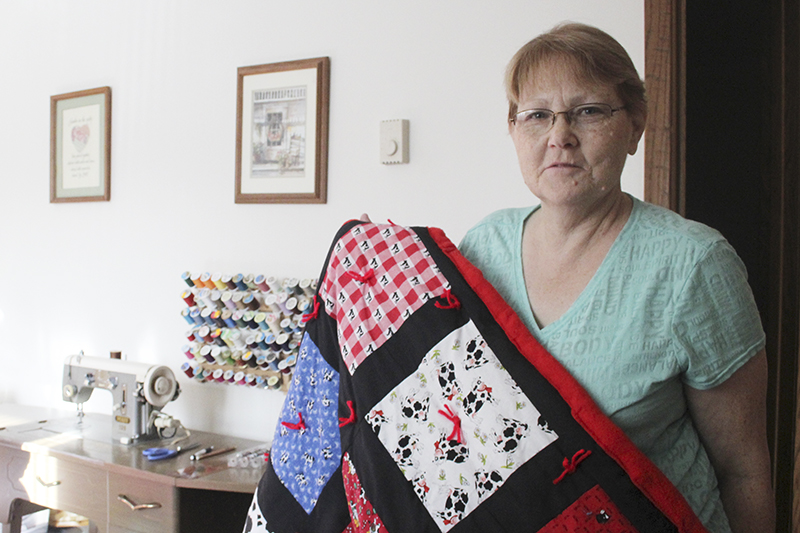 Elaine Grunzke has set the second bedroom in her new apartment aside as a sewing room for her quilting projects. Sarah Kocher/Albert Lea Tribune 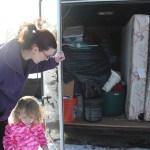 Megan and Ashtyn Kruger open up a trailer with contents from their former apartment. Kruger said most of their things have remained in storage while they live with her husband’s parents. Sarah Kocher/Albert Lea Tribune 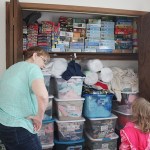 Most of the 15 tubs of material Elaine Grunzke has to quilt with now live in her spare closet. She had to wash all the fabrics after the fire, but they were undamaged. Sarah Kocher/Albert Lea Tribune 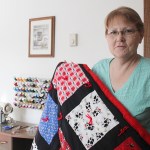 Elaine Grunzke has set the second bedroom in her new apartment aside as a sewing room for her quilting projects. Sarah Kocher/Albert Lea Tribune

WELLS — When Elaine Grunzke’s neighbor spoke with a relative after the Wellington Estates apartment fire left him and several other individuals without a home in August, he said he hoped two things: that his neighbor was all right, and that the quilt Grunzke made him for Christmas was all right, too.

Five months later, in January, Grunzke spread out her quilts. That month, she’d just finished one that was covered in cows on red patches, blocked together with blue fabric in between. She was partway through a Minnesota Gophers quilt, too, in the school’s signature maroon and yellow. The quilt she made for her neighbor for Christmas had globes on it, basketballs and the color blue. Her neighbor likes the color blue, she said.

And just like Grunzke, his Christmas quilt was fine.

On Aug. 5, 2017, Grunzke said she woke up as usual around 7 a.m. in the Wellington Estates apartments, where she had been living for seven years. Grunzke’s niece, Megan Kruger, lived down the hall with her husband, Joel, and their 2-year-old daughter, Ashtyn. Megan Kruger said Ashtyn woke her up around the same time.

Grunzke smelled something she couldn’t place. She didn’t think it was fire until her neighbor pounded on her door and the two went into the hallway.

“We went out, looked up at the ceiling, and there were two big brown spots,” Grunzke said.

Kruger went to her window and opened the blinds to see smoke seeping out from under the roof. She told her husband she thought the building might be on fire.

“I’m sure he thought I was nuts,” Kruger said.

“You never think it’s going to happen to you,” Kruger said.

‘Throw plans
out the window’

Kruger’s family moved in with her husband’s parents immediately after the fire and started the long process of washing everything.

“You don’t realize how much stuff you have to clean until you have smoke to clean out,” Kruger said.

Both Kruger and Grunzke said they were pretty lucky after the fire. Both of their apartments sustained water damage, but both families were able to keep personal items and clothes.

Kruger said her in-laws had a house fire several years before, after which they had to completely rebuild their home. In many ways, Kruger said, it meant they could be helpful as her family worked to rebuild, too. They knew the things to do — things like spending days washing the smoke out of clothes.

Kruger, her husband and her daughter still live with their in-laws. Part of the reason they moved in was because it was a familiar place for their daughter.

“That’s the only place she’s ever lived,” Kruger said of Wellington Estates apartments.

The family has started looking for a house. According to Kruger, they are taking it one step at a time.

“You kind of throw plans out the window when that happens,” she said.

‘The community was 100 percent’

Grunzke said she also did her fair share of washing. After the apartment fire, she temporarily stayed with her brother, David, and his wife. By Labor Day, she was in her new apartment in Wells, where she lives now. The loveseat, couch and end tables are all new to her. Her computer is not — she rescued it from a puddle of water, and it still works.

That Tuesday, the residents were allowed back into Wellington Estates apartments — the Tuesday she rescued her computer — and Grunzke said she had a whole crew of people in there to help her out.

“I had people in there I didn’t even know,” she said.

The residents were advised not to keep anything soft, especially their mattresses, Grunzke said. But the community was there.

“I didn’t buy a piece of furniture other than the mattress pad,” Grunzke said, and even that she suspected someone would have given her if she’d asked.

At first, this wasn’t an easy thing for her to accept. She said she couldn’t understand why people would do this.

“When that money come in … I called my minister … and I said, ‘I can’t keep taking this money,’” she said.

She also didn’t want to go to a garage sale held for the Wellington Estates residents, but her brother got her there — “‘That’s what this is for,’” he told her.

She struggled to cash the checks that came in. One of them sat uncashed for over a month.

Now, she can point to everything in her apartment that is the product of someone else’s generosity.

“The community was 100 percent,” she said. “I’ve never seen nothing like it.”

Five months later, the new apartment is working out well, Grunzke said. As far as moving on is concerned, she thinks she has done it.

Grunzke has fewer stairs to climb in the new place, which is better for her legs. She likes her landlord. And on top of it all, she gets to keep her neighbor — the one who got to keep her Christmas quilt.

“I was walking up the stairs, and there was Andy,” Grunzke said. He had moved in before her, upstairs in the same apartment building.

15 – Tubs Elaine Grunzke keeps her quilting materials in, which she had to go through and wash out after the fire

6 – Months since the Wellington Estates apartment roof caught on fire

7 – Time in the morning both Elaine Grunzke and her niece, Megan Kruger, woke up the morning of the apartment fire