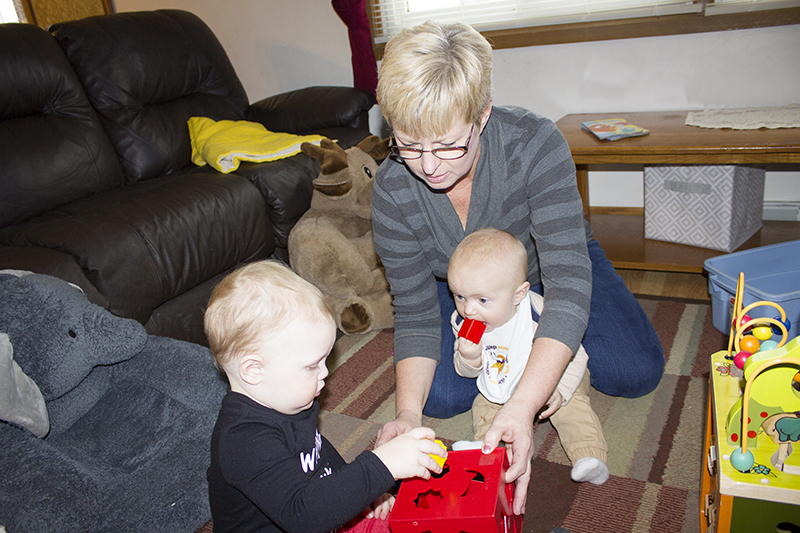 A long-time hairdresser and Agilis employee, Carson now helps her grandson and other children learn and develop while their parents are at work.

Carson became a licensed day care provider Nov. 13 after ending her employment at Agilis, where she entered data and processed mail donations and payments.

“I had thought of doing day care for a lot of years, even when my three daughters were younger, and then I had my first grandchild and I was really ready for a change of employment, and I decided what better time than to do it now,” she said.

When Carson was a  child, her mother was a day care provider before finding other employment. The first child Carson oversees usually arrives at about 8 a.m., and she usually has children in her home until 5 p.m. Some of the children are there on a part-time basis.

Carson is adjusting to her new schedule and learning more about the children she oversees.

As a day care provider, Carson is licensed to have up to 10 children — three are allowed to be 2 years old or younger, and two can be babies.

Carson enjoys watching the children she sees develop and hopes to expand her operation.

Carson and her husband, Jeff, have three daughters, Cayley, a senior at Albert Lea High School; and adult children Chelsey and Courtney.

Courtney Carson said her mother made a “huge change” when she decided to become a day care provider.

“She went from helping people of all ages to now just working with kids,” Courtney Carson said.

Courtney Carson has noticed her mother making sure her nieces and nephews have something to do when she is around them.

“From what I see, she loves kids,” she said.

She notices her son, Jackson, become excited when she drops him off at day care.

“When we walk in the door, he’s reaching for her,” Courtney Carson said.

Jeff Carson said he suggested his wife be a day care provider because her mother had taken care of their children, and now Angela Carson can do the same for her grandchildren.

He said his wife gets along with children.

“I think she enjoys being around them,” he said.

3 – Children Jeff and Angela have