A Kansas City, Missouri, woman who allegedly led officers on a chase Monday in Iowa and Minnesota that reached speeds of about 110 mph was charged with a felony Tuesday in Freeborn County District Court.

Monica Christine Lynch, 45, is charged with fleeing a peace officer in a motor vehicle. 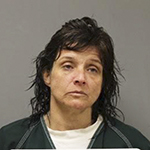 She reportedly fled the scene in a 2005 Dodge Ram after an officer attempted to pull her over for traveling 62 mph in a 55 mph zone. The truck turned north on I-35, reaching speeds of about 110 mph.

She reportedly threw items suspected to be methamphetamine and marijuana from the truck, according to the Cerro Gordo County Sheriff’s Office.

The chase continued through Worth County and into Freeborn County, where Lynch reportedly turned off the interstate onto Freeborn County Road 46 and swerved around a set of stop sticks thrown by officers, stopping suddenly on the exit ramp.

Lynch reportedly said “I’ve never done this before,” and laughed when officers asked her why she fled officers.

In addition to the Freeborn County charge, Lynch is charged with felony eluding, felony firearm possession by a felon, misdemeanor meth possession and marijuana possession, littering and having no driver’s license in Cerro Gordo County in connection with the case.