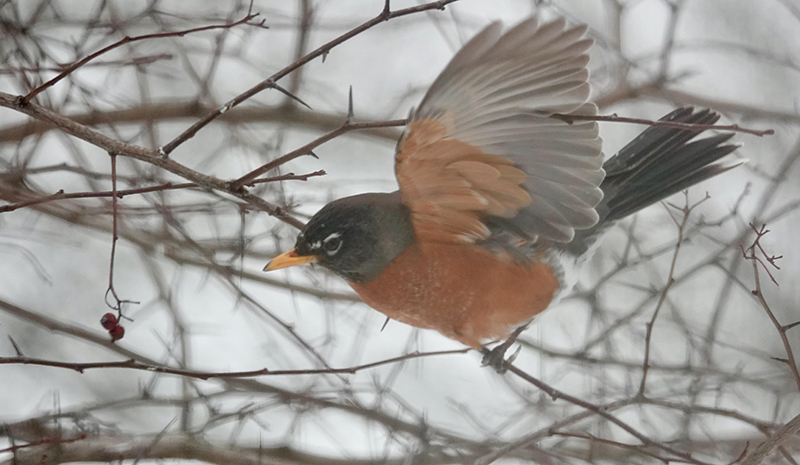 If there are no worms on the menu, robins eat the berries of a hawthorn tree. - Al Batt/Albert Lea Tribune

Resiliency works in favor of robins and other wild birds

It is not what most might consider a delicacy, but after several heapings of April snow, Albert Lea Seed House sold out of mealworms — twice.

Hartland naturalist Al Batt said robins return from migration early, particularly the males for dibs on primo territory. It is not atypical for the birds to encounter bad weather, but Batt acknowledged the snowy spring. Batt’s mother said a robin needed three snows on its tail before spring.

Last week, Batt received several calls, texts, emails and in-person comments from people who had seen one or more dead robins. Because robins are primarily ground-feeders, it can be difficult to access worms and food with snow or hard ground.

“They do suffer the consequences of getting here early,” Batt said. He estimated robins could go three days without food before suffering or starving.

According to Albert Lea Seed House Garden Center manager Mary Boorsma, residents were not up for watching that happen Thursday.

“Every person that came in the store asked for mealworms,” Boorsma said. “It was all they wanted.” 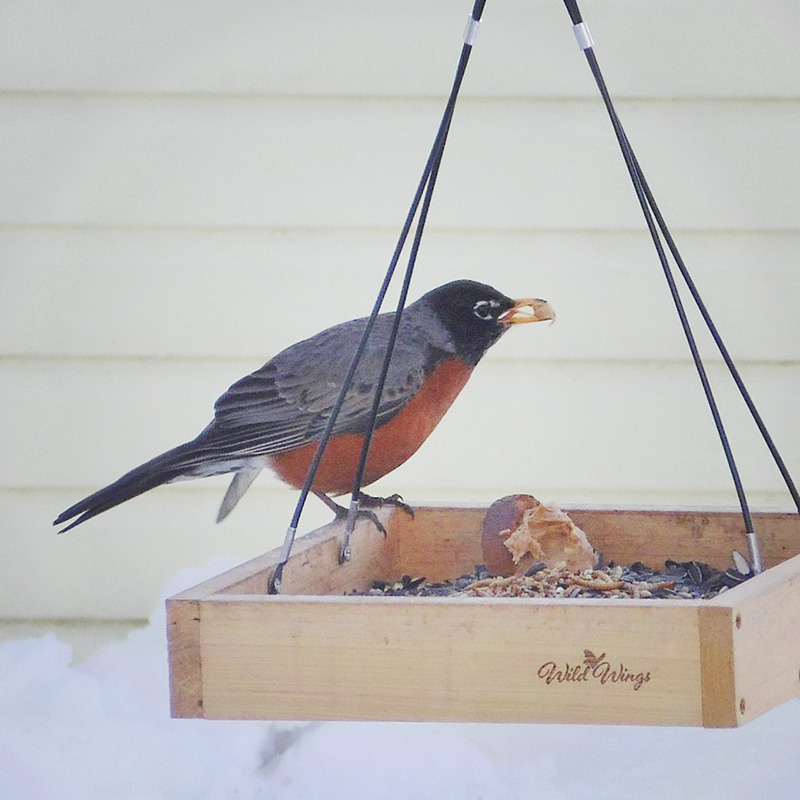 Ruth Olson took this photo of a robin eating mealworms and crunchy peanut butter outside her house on Friday. – Provided

The Seed House Garden Center keeps mealworms on hand because they are popular with a lot of birds, and with the people who like to feed them. Boorsma said the garden center ran out of the mealworms it had on hand before the snow, and the second shipment, the one that arrived Thursday, sold out within hours. Now, the Seed House is working through its third batch of mealworms, which are still available.

After running out of mealworms, Boorsma said the staff recommended suet balls with mealworms in them, which patrons could break up and put on the ground. She also recommended dried cherries, raisins and apples.

“We helped people understand that robins don’t eat just worms — that they eat a lot of different things,” Boorsma said.

To feed robins, Batt also puts out fruit, which he recommends chopping up to raisin size. In snow, people can also put out pieces of cardboard to prevent the birds falling deep into the snow.

For those planning ahead, Batt and Boorsma both recommended planting berries and bushes as a way to feed the birds year-round. The Batts have highbush cranberry, hawthorn, crabapples and hackberry trees.

“Boy, they come in and polish all those off,” he said. Batt said the robins also love their mulberries, which come in later in the season.

“Our mulberry trees shake as if they’re palsied with robins,” he said, calling mulberry and sarvisberry — the “ice cream trees.” Others, he said, are more like spinach: what they eat when they don’t really have a choice. (Those would be crabapples and hackberry.)

Batt noted that cold weather can also be tough on other bird species — for instance, purple martins — because many of them feed their babies insects, which need the protein for the remarkable growth required to leave the nest.

“They have a couple weeks to grow like weeds,” he said.

Still, Batt said he thinks the robin population will be OK coming out of this spring.

“Robins are very resilient, as are most of our wild birds,” he said. Additionally, robins seem to have adapted to humans as well. In successful breeding years, the species can produce incredible numbers of baby birds, Batt said.

Both Batt and Boorsma said they were struck by how many people cared about the robins.

“It’s kind of heartwarming, hearing everybody care about a bird,” Batt said.