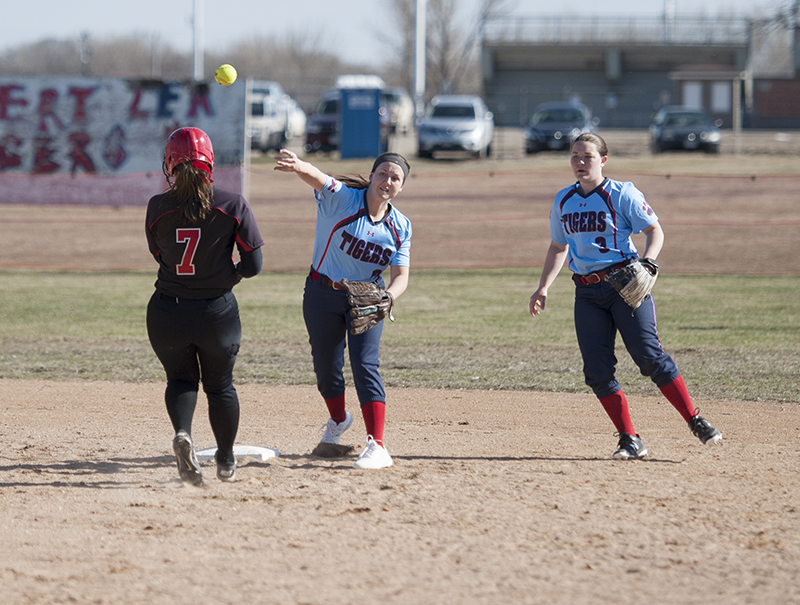 Albert Lea second baseman Taysha Sternhagen gets the out at second and throws to first in attempt to get a double play. The Tigers lost to the Rockets, 10-0. - Tyler Julson/Albert Lea Tribune

Tigers softball struggles to get offense going against the Rockets

Despite sticking with the Rockets in the first few innings of play, the Tigers were unable to keep the offense of the Rockets at bay, as they lost 10-0.

The first inning went relatively well for Albert Lea. Senior pitcher Megan Johnson along with the rest of the defense put up a quick one-two-three inning to bolster the team’s confidence early.

The Tigers were able to threaten in the bottom of the inning, when junior Lexus Saltou was able to reach base following a single, and moved into scoring position after a single by junior Khira Hacker. However, they were unable to push those runs across.

The Rockets would get on the board in the second after a Tigers error, and Albert Lea would be unable to swing any momentum back in its favor. 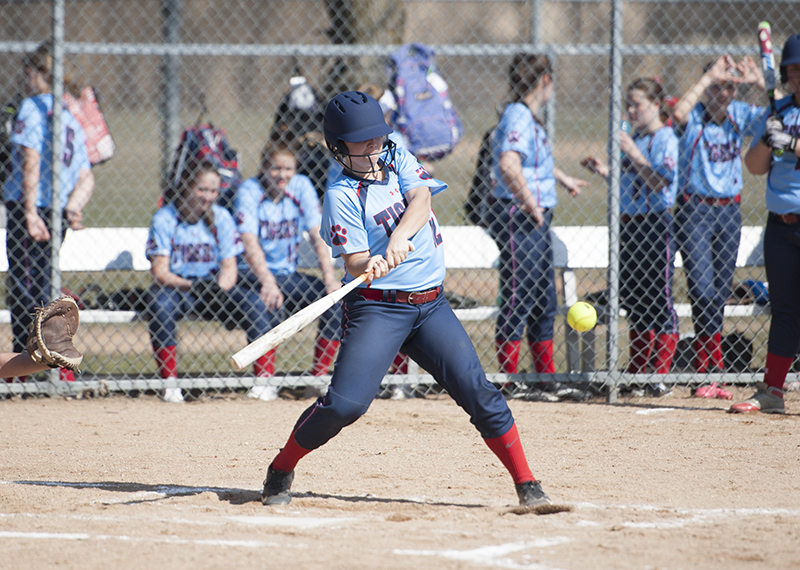 Albert Lea junior Lexus Saltou swings at a pitch in the first inning of the game against Rochester John Marshall Thursday night. Saltou would go 1-2 with a walk in the 10-0 loss to the Rockets. – Tyler Julson/Albert Lea Tribune

Head coach Casey Kortz talked about the errors and runners left on base.

“We kept up with (John Marshall) the first couple innings, but we began to make errors and couldn’t make up for it with our bats,” she said. “We stranded runners on bases for two innings and that hurt us offensively.”

The Tigers were able to get contact at the plate, however, a majority of their shots went directly to the opposing Rockets.

Johnson had a nice night on the mound. She recorded just one strikeout, but put the ball in places that forced batters to play into the defense for easy outs. The Rockets notched 10 hits, but only three of those were for extra bases.

“We were able to make contact with the ball better tonight then on Tuesday, but JM found our gaps,” Kortz said. “Dayna Edwards played a great game defensively. She had a lot of crucial catches that saved a lot of runs.”

The Tigers recorded four hits throughout the game. Saltou and Hacker each had one and senior Jenna Seavey had two singles.

The Tigers fall to 0-2 on the season and will be back in action Monday when they host the Cougars of Mankato East.