Duttons to return for show 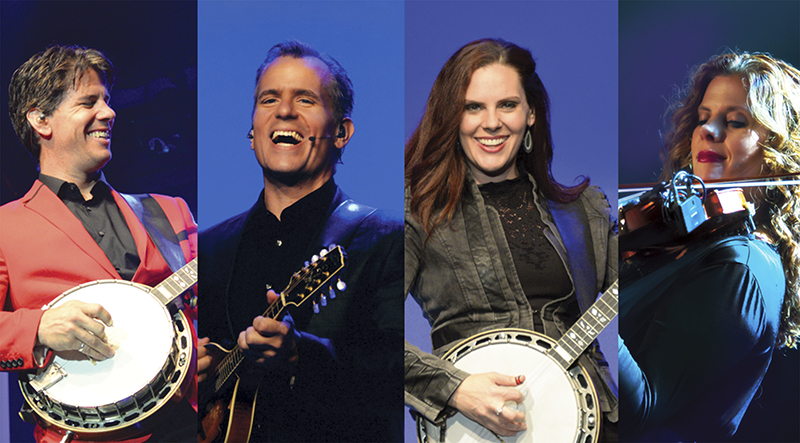 All performers considered, Sheila Dutton said the show will include around 20 Duttons on stage throughout the night, including Jonathan Dutton, left, Tim Dutton, Abigail Dutton Wright and Amy Dutton Arambulo. - Provided

It’s a family reunion every day the Duttons perform, and their next will take place in Alden.

The Duttons are an international performing and touring group spanning three generations of one family. Between them, they play violin, guitar, bass, viola, banjo, mandolin, keyboard, harmonica, drums and more. The family produces their own choreography and musical arrangement, and they sing the vocals to boot.

Sheila Dutton, who along with her husband comprises the first generation of the performers, said the show will include at least seven main performers and around 12 of the grandchildren.

“The grandchildren are coming into their own, which is really nice,” Dutton said. They have started playing a bigger role in the show, and this year’s trip to Alden will come complete with a quartet of four grandsons who have put a group together, which was just debuted in March.

“That’s been a real crowd-pleaser, especially with all the young ladies,” Dutton said.

She cited her grandchildren as one of the things people notice about their show when they see it again.

“The comment that we are getting is … ‘Oh, I can’t believe how much your show has changed,’” Dutton said.

In addition to some newer blood, the Alden show will showcase some of the work the group has been doing on current popular songs. Dutton said they will debut some new numbers in Alden. The group has been working on the opening number from “The Greatest Showman,” which Dutton said will be performed in Alden before it hits the stage in Branson, where the show at their theater opens Monday.

Nonetheless, she said her children and their musicianship are still the main core of the show, and they won’t leave out the audience favorites.

It’s a show that, in its different manifestations as the years continue, Alden local Gary Newman has seen over 20 times. He has been traveling to Branson for over 25 years, and every time he goes to Branson, he goes to their show.

“We’ve got to know them, me, my wife and I have got to know them personally from going so many times, and when they step onto the stage, they are high-energy, tremendous musicians and they put on a two-hour show that is second to none,” Newman said.

It was through that connection that he was able to encourage them to come to Alden to perform.

“The reason I started doing this is I thought, you know, so many people can’t afford to go down there or (have) health issues, and I said to myself, ‘Why don’t we bring them here? They like to travel,’” he said.

Dutton said Alden will be their first show of the Midwest touring season, and that the family is excited to come back to the area.

“We have a lot of wonderful memories and wonderful ties to Minnesota, but Alden in particular was a fun experience, because I remember the first time we went there and pulled into town and we saw the population sign … we just laughed, and so many people said, ‘How on earth did Alden get you to perform here?’ And we said, ‘We’ll go anywhere to make new friends,’” Dutton said. “That night, there were more people in the show than there were in Alden.”

For Dutton, making audiences happy and bringing families closer together is one blessing that comes out of what her family does.

“You’re kind of humbled when you think that people could, what you do could matter to people like that,” she said.

The Duttons will perform at 7 p.m. Saturday in the Alden-Conger High School gymnasium. They are also featured in a currently airing TV series called “The Duttons Through the Years,” which plays on RFD-TV.