No plans in place to fill his field operations job

After four months at the helm as interim administrator, former Director of Field Operations Andy Henschel has become the current district administrator for the Shell Rock River Watershed District. 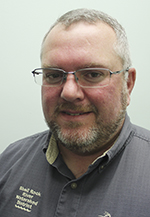 At Tuesday’s meeting, personnel committee member and Watershed District board secretary Mick Delger said there are no current plans to fill a director of field operations position.

“The plan is for Andy to basically do two jobs,” Delger said.

The district has options, Delger said, which potentially include hiring more interns or adding the position back later should the new arrangement not work out.

“Our plans are to try, and to save the district money,” Delger said.

Henschel’s salary will be released for public information at the next meeting.

The position of district administrator had one other applicant. The external applicant and Henschel were both evaluated on a scoring system brought in by a committee manager, and Delger said it worked well for the committee to make their decision.

“Andy, of course, scored higher,” Delger said. “Andy’s got the experience, and he’s been here doing it.”

Henschel thanked the board after the appointment passed unanimously.

As the district moves forward with the Fountain Lake dredge, Henschel had an April 4 internal plan meeting via conference call with J.F. Brennan Co. Inc., the company chosen to dredge the lake at the March 29 special board meeting. The district has planned for an April 24 in-person meeting with the company that will also include available dredge committee members.

The Watershed District has sent the contract for the dredging work to J.F. Brennan Co. Inc. and expects to receive it back at any time, Henschel said.

“Other than monitoring the dredging, the majority of work in phase one is done,” dredge committee member and board Vice Chairman Gary Pestorious said. He said upcoming committee considerations will be related to phase two of the dredge.

After receiving comments from community members after the Watershed District board’s March decision of J.F. Brennan Co. Inc. to begin the dredging, Lakes Foundation president Brian Hensley spoke to the board Tuesday about a need for more discussion. Hensley said the board had little discussion about the start of the dredging project at the March special meeting before approving the company selection.

“There’s a lot of questions about what it means and what this entails,” Hensley said of the dredge.

Watershed District board Chairman Dan DeBoer suggested setting up an event for the board to spread more information about the start of the project. He said he also heard similar comments to those heard by Hensley.

“I think everybody’s in shock that it’s actually going to happen,” Henschel said.

• Hensley reminded board managers of the upcoming Paddling Film Festival, which will be shown at 7:15 p.m. May 31 at Marion Ross Performing Arts Center. The film festival is being funded by the Shell Rock River Watershed District and the Lakes Foundation.

• The board approved a resolution to partner with Pheasants Forever in a wetland restoration project on roughly 250 acres on the west side of Pickerel Lake owned by Pheasants Forever. Watershed District resource technician Courtney Christensen said the project will create 32 wetland areas and 35 acres of wetland basin.

• Board treasurer Alan Bakken requested a summer update on property holdings belonging to the Watershed District.