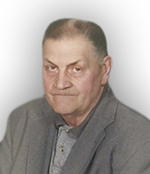 Keith Ronald Julson was born Feb. 27, 1938, to Irving and Velma (Leisure) Julson in Albert Lea. He grew up in Northwood, graduating from Northwood High School in 1956. He was an active member of the Army National Guard, and following graduation served in the United States Navy Marine Corps until honorable discharge in 1961.

On Aug. 18, 1960, Keith married the love of his life, Shirleen Knutson, at the Little Brown Church in Nashua, Iowa. To this union four children were born, Wendy, Dan, Steven and Kathy. For many years, Keith worked for the city of Northwood, and eventually found work as a janitor at the Worth County Courthouse until his health forced him to retire in 1975.

Following his retirement, Keith found enjoyment in walking around town. He could often be found walking with his cat, exploring the area. He was an avid reader of his Bible, going through multiple versions due to the use they received. He believed he had read it cover to cover at least seven times. Another of Keith’s loves was going for drives; whether the destination be unknown, to his fishing spots or out to eat, time in the car was cherished. His biggest enjoyment in life was found in his family — spending time with his grandchildren, going to their sporting events, fishing and just being together.

Keith was an active member at First Lutheran Church of Northwood, a former member of the Army National Guard and was honored to be a United States Navy veteran.