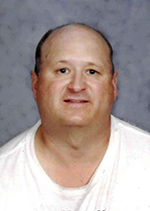 Larry was born April 29, 1960, to LeMoyne and Gloria Louise (Thompson) Kraushaar. He attended Austin High School, graduating in 1978. After high school, Larry farmed with his father for 20 years and then returned to school at Albert Lea Vocational College in the mechanical program.

On June 17, 1995, Larry married Michele Kay Mickelsen at Chapel of Love in the Mall of America in Minneapolis. Together they had two sons.

Larry worked for Hormel Foods in Austin in the rendering area. He also helped his sons with their Pinewood Derby cars. He was known as best at his craft and the tool man. Larry recently began participating in recreational shooting. He loved his dog, Zeus, and his Jeep very much. Larry was always willing to give blood at the blood bank. He will be dearly missed by all who knew and loved him.

He was preceded in death by his mother, Gloria Kraushaar; grandparents Louis and Margaret Thompson and George and Dora Kraushaar; and aunt and uncles Carl DeRousse, David Thompson, Clayton and Maxine Kearns, and Virgil Buland.