Funeral services for Leona L. Roberts, 90, of Albert Lea will be at 2 p.m. Saturday at Our Father’s House in Albert Lea. The Revs. Charles Johnsrud and Don Larson will officiate. Interment will be at Mansfield Township Cemetery. Visitation will be from 5 to 7 p.m. Friday at Bayview/Freeborn Funeral Home and one hour prior to the service at the church Saturday. Online condolences are welcome at www.bayviewfuneral.com. 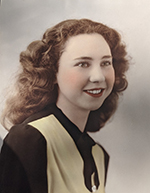 Leona Lillian Roberts was born Feb. 28, 1928, in Kiester, the daughter of Thomas and Vera (Hintz) Wipplinger. She grew up in Waverly, Iowa, and attended school in Kiester. Leona was united in marriage to Leon Roberts in December 1948.

She enjoyed cooking, crocheting, gardening and making her own soap. She was a member of REACT, an amateur radio organization. Leona loved spending time with her family, especially her children and grandchildren. 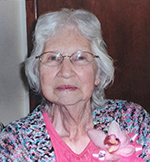 Leona was preceded in death by her parents; husband, Leon; daughters Lezlie Carlsen and RaNae Roberts; and brother, Arnold Wipplinger.