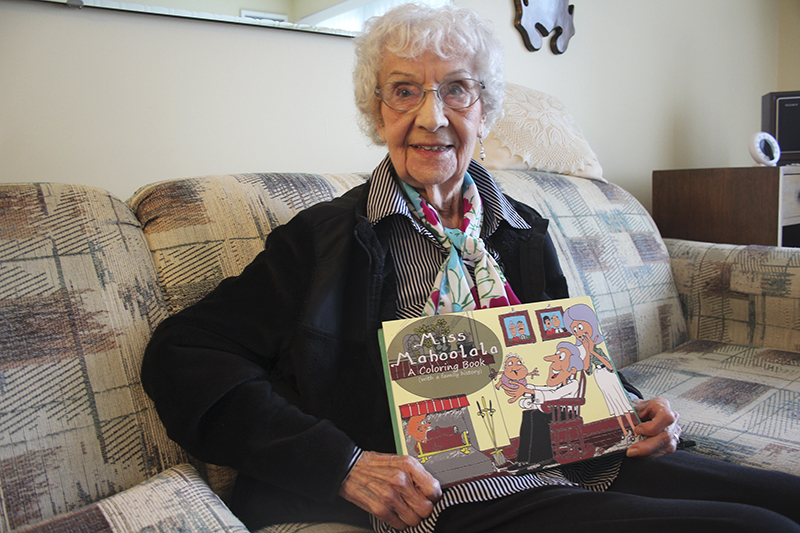 Doris DeNeui holds a copy of Miss Mahoolala, which she will be signing for community members on April 6. - Sarah Kocher/Albert Lea Tribune

One hundred years later, Doris DeNeui is revisiting her childhood.

On April 6, DeNeui is having a book signing at Thorne Crest Senior Living Community to celebrate the publication of her children’s book, “Miss Mahoolala: A Coloring Book (with a family history).”

The coloring book is dedicated to her mother, to whom she presented the first edition at a 1994 family reunion.

“I just thought that I would like to do something for her,” DeNeui said.

In verse, the coloring book is a catalog of DeNeui’s silly behavior from when she was young. DeNeui is Miss Mahoolala — it was what her mother called her.

“I don’t even remember that, but she did,” DeNeui said.

After the family reunion, DeNeui said she stuck the coloring book in a drawer and forgot about it. She found it in September, near her 100th birthday. After running it by her daughter and youngest son, DeNeui decided to publish the book. Her son, Paul, took all the loose pictures and material, put the book together and had it published. He had published through Amazon before, so DeNeui was able to use the account he had set up to get her book online. She got her proof copy just after Christmas.

“I thought it would be kind of a fun thing to sign the book,” DeNeui said. She worked with Thorne Crest Administrator Chris Schultz to set up the signing. She will have 50 copies of the book for sale, and the signing is open to the community. 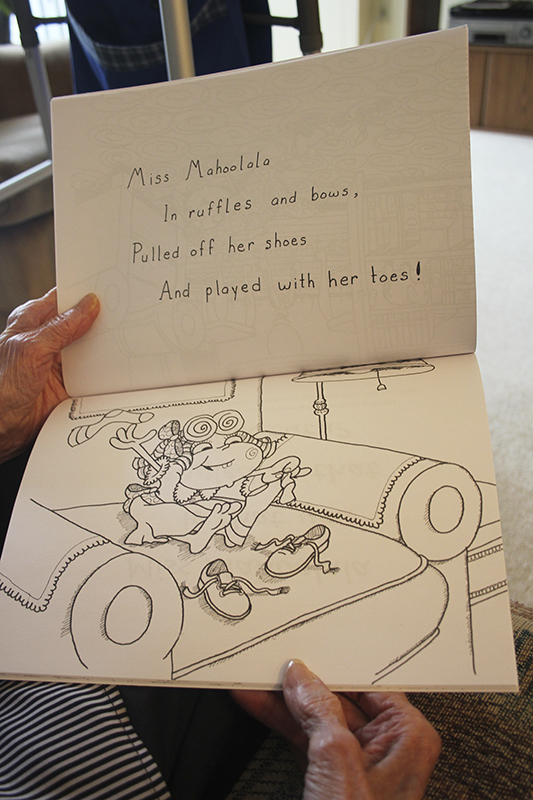 The illustrations, created by professional illustrator and DeNeui’s nephew, Dean E. Lindberg, had been prepared for the reunion edition. The few extra verses DeNeui wrote later for the published version are accompanied by blank pages, presented as spaces for children to draw their own pictures.

The illustrations are all black and white for children to color in, and the details depict DeNeui’s childhood home as she remembers it.

“Those pictures are really accurate to the house,” DeNeui’s daughter, Bette Jensen, said.

There’s the pokers by the fireplace, designed by DeNeui’s mechanical engineer father. The open stairway up from the living room is right, as is the mirror above the fireplace. The illustrator had his own memory from his grandparents’ house to draw from while illustrating.

DeNeui said she chose a coloring book because she knew they were popular right now.

Jensen said she is glad her mother continues to want to share with other people.

“I’m really proud of her for wanting to do something like this,” she said.

It’s not the first time. This is DeNeui’s third piece of work, following a memoir she wrote at 90 and another about her parents’ life.