ST. PAUL — Former Minnesota Gov. Tim Pawlenty announced Thursday he will run for his old job, ending months of speculation about a return to politics following his short-lived 2012 presidential campaign. 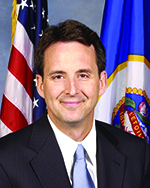 The two-term Republican governor had been inching toward a run for months, quitting his Washington lobbying job and filing a campaign committee so he could begin fundraising. His entry blows up a crowded group of candidates that has struggled to raise money, and may entice spending by national conservative groups eager to win in a left-leaning state.

Pawlenty joined the race via a 2-minute campaign video that featured the sweater-clad, salt-and-pepper-haired politician speaking to the camera in a living room. He made only one reference to his eight years as governor, instead going heavy on such conservative issues as expanding vocational schools, cracking down on ineligible enrollees in the state’s public health care programs and cutting taxes on Social Security income.

Pawlenty was treated as the presumptive GOP front runner by both parties well before Thursday. His shadow kept big-money donors on the sidelines for months, making it difficult for Republicans already in the race to build their campaigns. And Democrat-allied groups started to attack Pawlenty while he was still publicly flirting with a bid.

The former governor spent the weeks leading up to his launch putting campaign pieces in place, including recruiting staff and filing a formal campaign committee in mid-March — a necessary step to begin fundraising in earnest. He also started an aggressive outreach campaign to Republican activists who will vote on the party’s endorsement, testing messages that were deeply critical of his Democratic successor, Gov. Mark Dayton.

The 71-year-old Dayton’s decision not to seek a third term set off a wide-open race to replace him. Despite Minnesota’s liberal history and talk of a wave election in 2018, Republicans see hope for breaking through two years after Donald Trump nearly beat Hillary Clinton in Minnesota.

For Pawlenty, a return to his old perch would be political redemption. Marketing himself as a “Sam’s Club” Republican, he flamed out early as a presidential hopeful in 2012, quitting after a third-place finish in the Iowa straw poll.

His career since then gives fodder to both Democrats and his GOP rivals. Pawlenty joined the Financial Services Roundtable in 2012, making more than $1 million a year while lobbying on behalf of the nation’s largest banks until he left the job in mid-March. On his campaign website, Pawlenty refers to that work only as serving as “the leader of a large trade association.”

As Pawlenty publicly mulled a run, some Republican rivals dismissed him.

“Recent history from Minnesota and nationally is filled with Republicans who had piles of money and lost,” said Hennepin County Commissioner Jeff Johnson, who lost the 2014 race to Dayton.

Democrats started laying the groundwork for a campaign against Pawlenty months ago. They bashed his high-powered lobbying job and accused him of mishandling the state’s finances while governor, saddling the Legislature with a $6 billion budget deficit when he left office.

While Pawlenty is the last Republican to win statewide office, that was 12 years ago. And he never got more than 47 percent of the vote, winning both of his elections with the help of third-party candidates seen as drawing off some of the Democratic vote.

Pawlenty is re-entering a Republican Party drastically different from his previous electoral wins — and, in the eyes of some Republican voters, with the possible baggage of being a once-vocal critic of Trump.

Johnson and other GOP candidates dinged Pawlenty for withdrawing support for Trump in the run-up to the 2016 election. Pawlenty called then-candidate Trump “unhinged” and unfit for the presidency after his vulgar comments about women surfaced from a 2005 recording.