Prairie Profiles: A tradition lives on 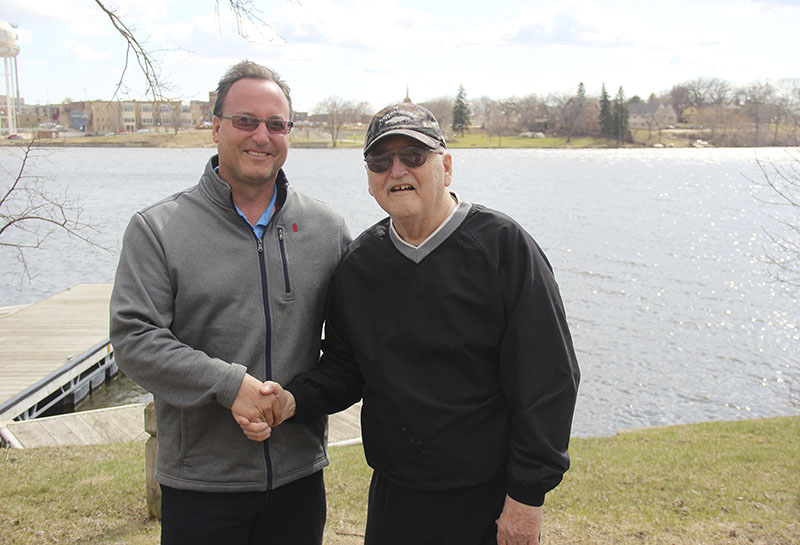 Mark Malepsy, left, took over this year as annual watcher for the ice-out of Fountain Lake from his father, Bill Malepsy. Bill Malepsy has recorded the ice-out since the 1960s. Sarah Stultz/Albert Lea Tribune

Father passes duties as watcher of Fountain Lake to his son

An Albert Lea man passed the torch last week to his son for a long-standing city tradition.

Bill Malepsy said he became the official watcher of the lake in the 1960s and had measured the annual ice-out dates on Fountain Lake ever since — until this year. With his retirement as a barber from Bill and Mark’s Barber Shop on East Clark Street, he said he felt it was time to also retire as the ice-out recorder.

His son, Mark Malepsy, who has worked at the barbershop with his father since 1987, said he will continue the responsibility as well as the business. He noted he doesn’t plan finding a replacement for his dad in the barbershop, however.

“I’d rather just work with my dad,” he said.

The two men said a lot of people call the barbershop each year asking about the annual ice-out date.

“The whole town gets involved,” Bill Malepsy said. “I didn’t think it was a big deal, but it is.”

The senior Malepsy said he started as watcher of lake after the responsibility was passed on to him from John E. “Pop” Murtaugh.

Murtaugh started recording the ice-out date in the spring of 1912. He was then the owner and operator of the Casino, a lakeside dance hall and canoe and rowboat rental service at the north end of Newton Avenue. The melting of the ice cover on Fountain Lake was a prime business concern for Murtaugh. He would reportedly paddle a canoe all the way around the lake’s shoreline, including the bays, to check on the status of the hopefully ice-free surface.

Murtaugh recorded these ice-out dates in a small notebook, still in Malepsy’s possession.

Malepsy said he worked for Murtaugh, cleaning out boats and restrooms at the Casino, and at that time, they used to race across the lake.

The rule used since Murtaugh began to determine the lake’s actual ice-out date is based on the day when there’s only water visible on all parts of the lake, including Dane and Edgewater bays.

Though Bill Malepsy said he did not paddle around the lake on canoe like Murtaugh did, he would drive around it to make the determination.

Mark Malepsy said he looks forward to continuing the tradition in his father’s footsteps.

The recording of the ice-out dates for Fountain Lake is reportedly the third oldest in the state, according to the State Climatology Office at the University of Minnesota.

This year’s ice-out date, this past Friday, tied with 1951 for the second latest the ice has ever lasted since records were kept.

Interesting fact: Malepsy travels out West every year with his cousin Mike Malepsy and his cousin’s wife, Bonnie, to fish on the Rogue River.