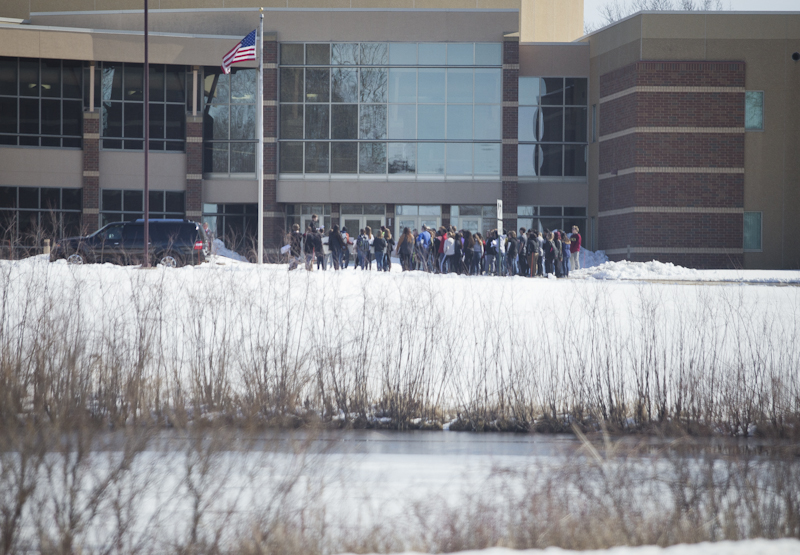 Some carrying signs that read “Fear has no place in schools,” “Young Angry and Ready for Change” and “Enough is Enough,” a group of approximately 100 students spent their third period outside Albert Lea High School protesting gun violence Friday on the 19th anniversary of the shooting at Columbine High School.

The school is one of over 2,000 nationwide to participate in Friday’s National School Walkout.

“We are gathered here today, along with over 2,000 schools around the country, for a very important reason,” freshman Ava Corey-Gruenes said in her speech at the walkout. “We have organized this protest in order to send the message to the lawmakers and politicians of our country that we need peace.”

Text from the speeches were provided to the Tribune by Cope. During the protest, police were present at the high school and the school principal and another administrator were stationed at the front entrance to the high school, where they stopped approaching cars to inquire about their arrival at the school before allowing them onto grounds.

After the speeches, students observed 17 minutes of silence — to represent the 17 deaths of the Parkland, Florida, school shooting in February — and then were led in “We Shall Overcome” by students Maggie Moller and Carley Talamantes.

After the protest, which Cope said was peaceful, students re-entered the building to resume the school day.

“Our main purpose here is to get the message across,” said Cope, who spearheaded Albert Lea’s walkout.

That message? It’s to politicians and the media.

Students wanted others to understand that the group was not promoting banning guns, but rather about keeping the wrong types of guns out of the wrong hands, Corey-Gruenes said. Another speech cited responsible gun storage, a strong background check system and mental health evaluations.

One student’s sign put it this way: “No one is taking away your guns.”

‘We should be proactive’

Corey-Gruenes said the students have talked in school about what to do in case of a school shooting. Outside of conducting required lockdown drills and moving forward with education regarding ALICE, an active shooter response training the district has been rolling out since almost 300 district teachers and front-line secretaries attended training in January, Albert Lea High School Principal Mark Grossklaus said conversations regarding gun violence have been student-led. However, he said he believes students know he, the administrators and the school resource officer are visible at all times.

“I think after events happen everybody gets nervous, but I think kids feel pretty safe here,” Grossklaus said. “They’re nervous, I mean, about what’s going on in the world I think more than anything.”

Cope said she used Facebook, Snapchat and Instagram to spread word about the walkout at Albert Lea High School. She also handed out small paper copies of a tweet from National School Walkout, @schoolwalkoutUS, that read, “On Friday, April 20th, we want students to attend school and then promptly WALK-OUT at 10:00 am. Sit outside your schools and peacefully protest. Make some noise. Voice your thoughts. We are students, we are victims, we are change.”

However, Cope credited some of the event’s traction to a statement sent from administration to parents and students regarding the walkout, which noted the date, time and cause associated with the walkout.

“I’m thinking, ‘Thanks,’” Cope said. “… Ever since then, I’ve been hearing it murmured about in the hallways.”

The school’s statement regarding the walkout said the protest was student-led and neither sponsored nor endorsed by the school or district, but school officials recognized the walkout as an expression protected by students’ Constitutional rights.

“The best way for us to ensure student safety during the school day is to know where our students are, and that’s simply not possible once they leave (the) school building,” the statement said.

According to the same statement, students who participated in the protest were to be marked with an unexcused absence and receive associated consequences. Although Albert Lea High School student handbook’s attendance policy states students may be assigned detention for their first unexcused absence, Albert Lea High School principal Mark Grossklaus said he does not intend to assign detention to any students participating in Friday’s walkout.

“These kids are going to walk back into school,” Grossklaus said during the protest. He said the school’s priority was safety, especially after hearing of the shooting Friday morning before a walkout at Forest High School in Ocala, Florida.

The student body was not united in support for the protest.

Although the protest was peaceful and no one expressed opposing views during the protest, Cope said she received negative messages afterward.

Grossklaus said some students approached him at lunchtime prior to Friday about what students could wear to school in support of the Second Amendment.

“You know what the school dress code is, what’s appropriate, and they’re fine,” Grossklaus said. At the time of the protest, Grossklaus said he had been out in the halls and hadn’t had any problems with dress code or heard students saying anything problematic toward each other.

Corey-Gruenes said the school district had been relatively neutral toward the walkout.

“We’re going on with a day of school,” Grossklaus said.