‘This is just the bottom of the funnel’ 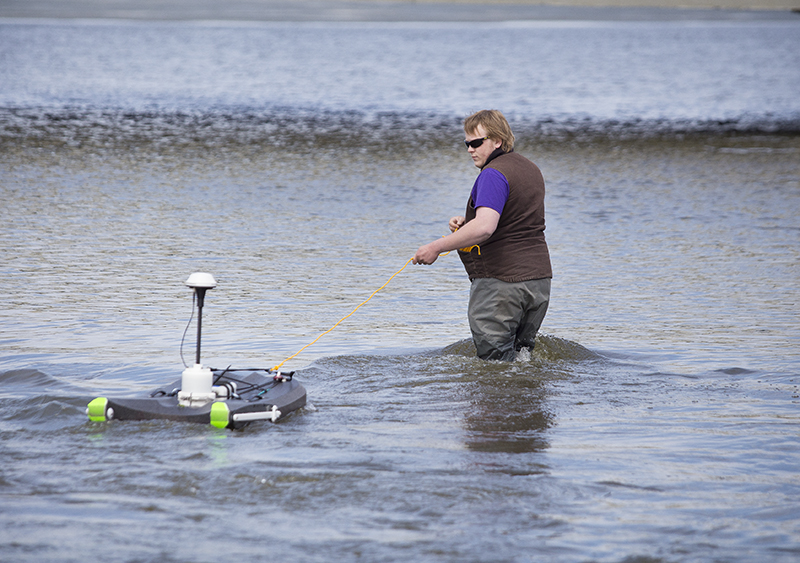 Some stream flows high, but still normal for time of year

If you see the Shell Rock River Watershed District’s conservation technician at work monitoring streamflow and water quality, you will see him leading a small boat the size of a kneeboard through the water, perpendicular to the flow, the way one might lead a frail but independent relative across a street. He stays close and walks slowly, across and back. On shore, a tablet registering real-time readings from the monitoring boat is busy drawing a design that looks like a dog got ahold of an Etch A Sketch: two meandering lines wander across the screen as smaller, staccato ones jet away erratically in a design that looks a bit like a burnt feather.

At each of its 13 monitoring sites, the Watershed District will do this once every other year during the summer, preferably after rain events, conservation technician Scott Christenson said.

Getting the flow readings is important, he said, but what’s also important is keeping tabs on what is “coming down the pipeline” — what those flows are carrying in terms of nutrients and sediment. Most of the nutrient runoff occurs in May and June.

In addition to streamflow rates, the district’s mini boat keeps track of its own position using GPS, reads the substrate, registers the boat’s speed and measures the temperature. According to the Department of Natural Resources’ weekly streamflow report released April 23, the Shell Rock River Watershed has been experiencing flood-level flows for the past two weeks. The first two weeks of the season showed normal flows, the respective reports said. 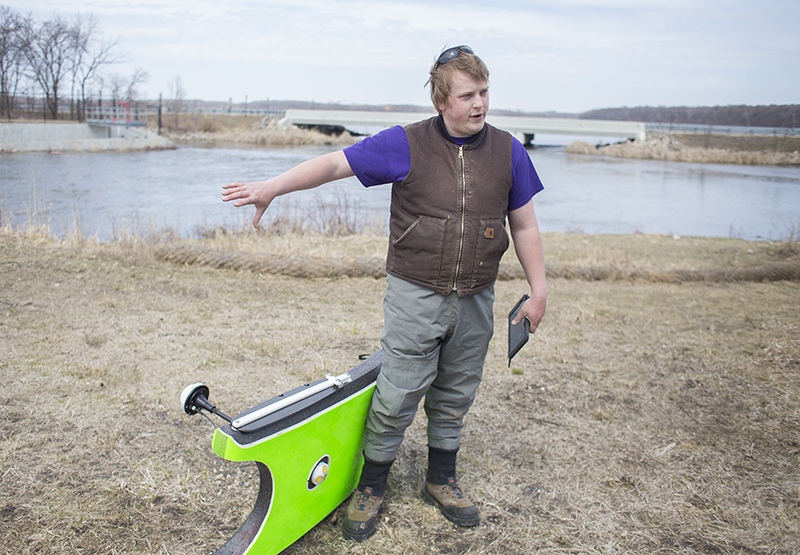 Jim Sehl, DNR assistant regional manager for the division of ecological water resources in New Ulm, said the watershed readings are grouped together like that because those three watersheds are upstream of Austin and drain into the gauge site.

“Your spring snowmelt or ice breakup is typically one of your highest flows throughout the year,” Sehl said, noting that this year’s snow melt was rapid.

A Friday reading from the DNR’s cooperative stream gauging site on the Shell Rock River near Gordonsville showed an 11 a.m. flow there at 782 cubic feet per second.

One site the Shell Rock River Watershed District monitors from is the Albert Lea Lake dam as the lake feeds into the Shell Rock River. A flow reading taken by Christenson on Thursday registered the stream flow at that site as almost 1,872 cubic feet per second.

For this time of year, Christenson said that level of stream flow is normal for that site. Sehl also noted that spring months tend to record higher flows.

The monitoring site at the Albert Lea Lake dam has 70,000 or 80,000 acres draining into it, Christenson said.

“This is just the bottom of the funnel,” he said.

Additionally, the ice is coming off the lake, the snow has melted and the frost is coming out of the ground, all in a tight timeline.

“You get a winter like this and it’s just kind of like a cardboard box full of water, you know?” Christenson said. “It’s just going to saturate and burst open.”

For a smaller area — Pickerel Lake, for example, which has around 25,000 acres draining into it — the readings won’t necessarily also show flows as elevated as the Albert Lea Lake dam site, or the reading from the DNR, Christenson said.

Albert Lea Director of Public Works Steven Jahnke said from the city’s perspective, monitoring for water levels occurs visually at Fountain Lake and Albert Lea Lake. The city engineering department will watch how high the water level gets relative to the road.

“We’re in good shape right now,” Jahnke said. Both lakes are going down. From his monitoring at the dam between Albert Lea Lake and the Shell Rock River, Christenson also said he saw receding levels.

Jahnke said compared to what the city sees in average years, the distinction this year is the timing. Because the snow and ice are melting later in the season, the ground has stayed saturated and wet later. A heavy rain event now may mean a greater chance of flooding at this time of year than in some years past. 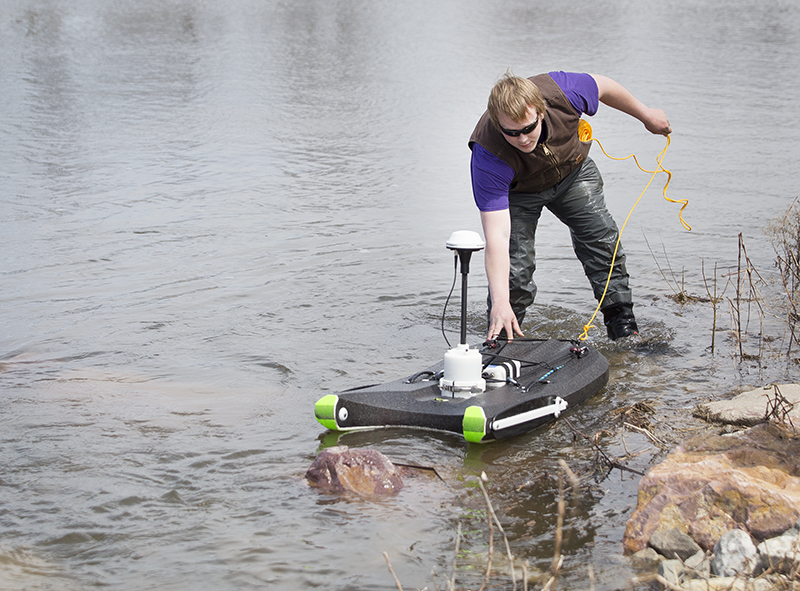 In addition to streamflow rates, the district’s mini boat keeps track of its own position using GPS, reads the substrate, registers the boat’s speed and measures the temperature. – Colleen Harrison/Albert Lea Tribune

For those living along rivers or drainage systems in the Shell Rock River Watershed District, Christenson said impacts of the high flow levels could include property damage, erosion and likely saturated soils.

Although the boat monitoring occurs every other year at each of the sites, the Watershed District is monitoring elevation and lake depth through an instrument encased in a PVC pipe, also located at each water monitoring site. The district can use it to get a rough estimate of flow. After the ice melts and before it freezes up again, they are placed at the monitoring sites every year, passing information to the Watershed District every 15 minutes. At the Albert Lea Lake dam site, there is also a sonar station at the end of the dam catwalk and a staff gauge that marks the elevation of the water. The Watershed District can check flow readings against each other to see that they are all registering similar numbers.

The Watershed District is adding three monitoring sites this year  — one on Upper Twin Lake, one on Lower Twin Lake and one at the Pickerel Lake outlet dam — as their associated rivers achieve base flows, Christenson said.