A Wells man who allegedly assaulted a woman he knew last weekend was charged with three felonies Monday in Faribault County District Court. 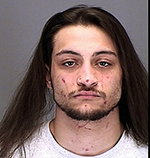 Court documents state Alger was charged after an officer with the Wells Police Department responded to a domestic assault Saturday evening in Wells. Alger was reportedly seen walking away from the residence.

The alleged victim reportedly had blood on several areas of her face and chin and appeared to be bleeding from inside her mouth. She denied medical care.

Alger allegedly pushed her, placed his hands around her throat to stop her from screaming and placed his fingers into her mouth and down her throat.

The assault allegedly lasted 20 to 30 minutes.

Red marks were reportedly observed on the alleged victim’s throat, along with swelling and lacerations inside her mouth.

Court documents state after Alger was arrested, he stated, “he was going to have to pay for what he did.”

Judge Troy Timmerman set conditional bail at $35,000. Alger’s next appearance is scheduled for May 7.