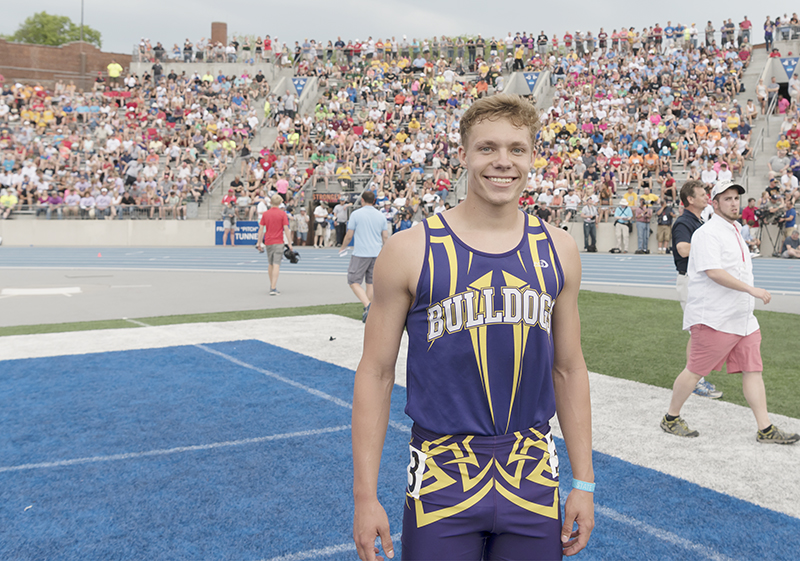 As a senior at Lake Mills High School and a member of the track and field team, Grant Fjelstad recently added a second state championship to his resume.

Fjelstad dominated both his preliminary heat and the finals of the 110-meter hurdles, finishing with a time of 14.71, a new career best in his final race.

“The feeling of crossing the finish line knowing that everything I had been working towards for the last four years had finally paid off was unbelievable,” Fjelstad said. “I still don’t think it has quite sunk in yet.”

Although this isn’t his first title, it is his first time being crowned a champion in an individual event. Last year Fjelstad won his first state championship in the shuttle hurdle relay, along with teammates Alex Albert, Charlie Dugger and Slade Sifuentes.

Fjelstad talked about the different feeling he has knowing he earned this accomplishment on his own.

“It does feel different,” he said. “Although winning with three friends alongside you is amazing, there’s something about doing it on your own that makes the feeling that much better.”

Fjelstad also competed in the shuttle hurdle relay again this year, with the team taking third place in the event.

Even though he has ran on the Blue Oval at Drake Stadium many times before, Fjelstad said he couldn’t help but feel a little nervous before he ran at his last high school meet.

“(I was) mainly nervous,” he said. “Knowing that this was my last chance to run as a Bulldog added to the nerves because I wanted to end on a high note. So all I kept telling myself was, ‘Just have a clean run, and whatever happens, happens.’”

A high note it was.

Fjelstad’s personal best of 14.71 topped the rest of the field by nearly a half-second. Getting his time to under 14 seconds was one of his goals all season and one of his biggest motivating factors. He said it felt great to finally accomplish that in his last race of his high school career.

Fjelstad said he has been intrigued by track and field ever since he was in elementary school, when he would participate in the track and field days. The competition aspect is what attracted him to the sport and he said he knew, even back then, that track would be one of his favorite sports to compete in.

Just a few days removed from graduation, Fjelstad’s next plans are to attend college at Wartburg College, where he is already signed on to run track and field. He also plans on majoring in engineering science and hopefully moving on to a graduate school to study electrical engineering.