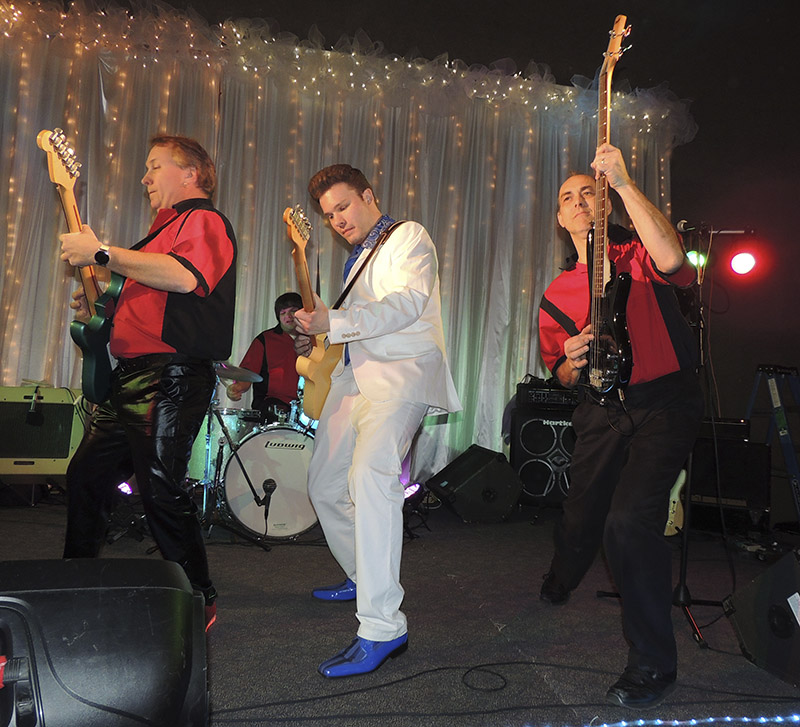 Richie Lee, Tony Halsrud, Dennis Niedert and Justin Cramer perform as Richie Lee and the Fabulous 50s in January. The group is coming to Albert Lea on May 19. - Provided

For those who left their time travel machines at home, May 19 presents a window of opportunity — specifically, a window that spans the 50s and 60s.

Richie Lee and the Fabulous 50s, a quartet with a flair for early rock ‘n’ roll, will perform at the Marion Ross Performing Arts Center at 7:30 p.m. May 19.

“I grew up listening to all the music my parents, that’s the music they listened to around the house,” Richie Lee said. Lee primarily sings and plays guitar for the group. “… It’s the type of music I never get tired of.”

Lee said he is open-minded about all kinds of music, but early rock ‘n’ roll stuck out.

Bass player and vocalist Dennis Niedert said the show will move forward almost chronologically, starting in the 50s with some rockabilly through to the recreation of rock ‘n’ roll with bands like the Beatles and Beach Boys, finishing up just before the timeline hits psychedelic rock.

“You get a really good, good forte of the entire rock ‘n’ roll experience, not just the early ’50s,” Niedert said.

Over the last two years, the band’s influence has expanded as members come in with different ideas, Niedert said. According to Lee, the group is continually learning new songs and working on new things.

“We do know a little bit of everybody, really, not just one thing,” Lee said.

This year’s show has also brought more vocal harmony than in the past, Niedert said. But the group is mixing it up in more ways than one. Lee said the band members are all skilled on several of the on-stage instruments.

“We literally switch it up from song to song at a time,” Niedert said. “It’s not one person in the middle anymore … it’s a very shared team atmosphere.”

That team feel extends into the group’s chemistry, which he said is strong. Ideas proposed by one band member will be expanded by another person.

“We try to get as close to the record as we can,” Lee said. The band members try to capture the essence of the songs they play.

“We actually try to figure out what makes the song good and, you know, try to replicate that live,” he said. He said the resulting sound is more authentic than just playing the music.

And for the audience, Niedert said he wants them to take away a genuine experience: “A smile. A tear. A memory.”

Who: Richie Lee and the Fabulous 50s