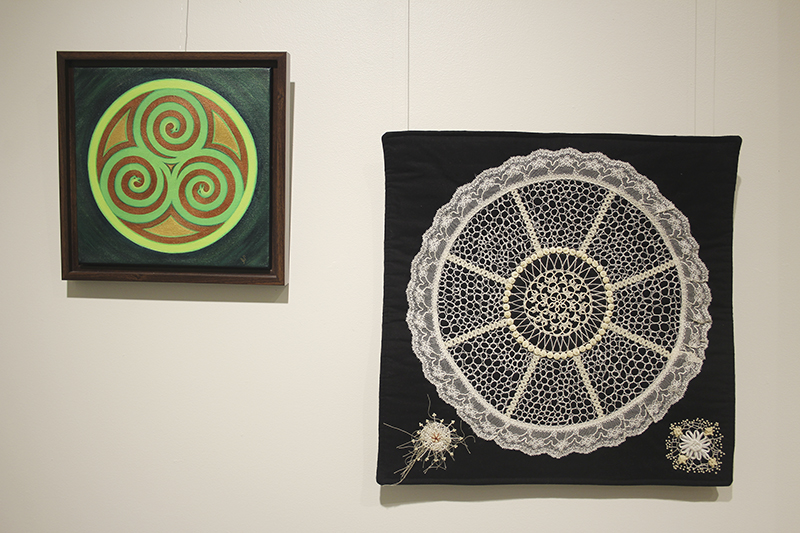 Susanne Crane’s piece, left, and Andrea Blackmon’s piece on the theme “Sacred Geometry” both incorporate circles. Neither of the artists shared their work with the other before it was completed. - Sarah Kocher/Albert Lea Tribune

Armed with 15 themes, two different primary mediums and one gallery space, two artists will display side by side at the Freeborn County Arts Initiative for a show three years in the making.

Washington, D.C., fiber artist Andrea Blackmon and local painter Susanne Crane’s show, “Two Artists Squaring Off,” features 30 pieces — 15 from each — all square in shape and one for each of the themes, which range from lunar attraction to portraiture to recycle/repurpose and several places in between.

“For like 20 years we’ve wanted to have a show together,” Crane said. The two met in Minneapolis and have stayed friends despite moves. “It’s so wonderful to see her ideas and my ideas bouncing around together.”

“Two Artists Squaring Off” opens Thursday, with an artist reception from 7 to 9 p.m. Friday. Both Crane and Blackmon will be present.

Crane said the square format of the pieces was chosen in an effort to give the show a cohesive feel despite the artists’ different mediums. Before starting, they brainstormed back and forth until they reached 12 themes (later expanded to 15 to better fill the gallery space). After that, Crane said, the pair had no idea what the other was doing.

“We decided right away that we would have them paired and shared,” Crane said. 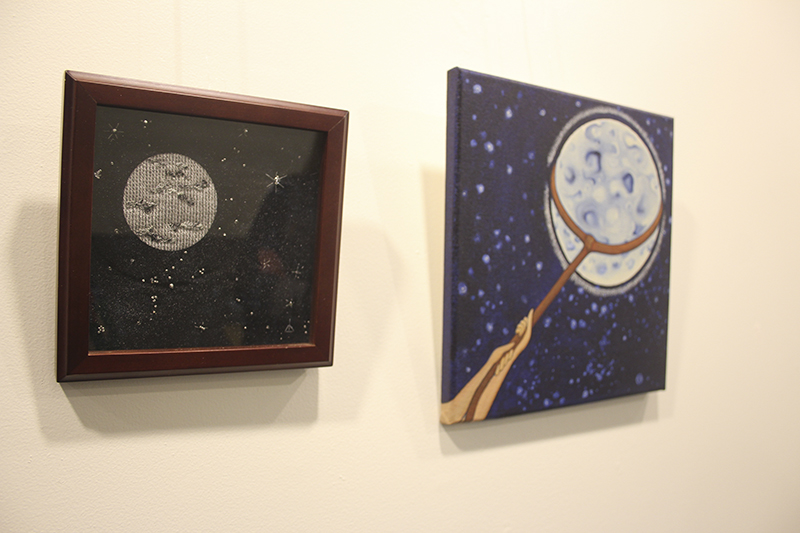 And in doing so, Crane noticed running threads connecting the pair’s pieces.

“The show is way more cohesive than I ever expected,” she said.

Take, for instance, the black, white, grayscale challenge. It was Blackmon’s idea; she works more with blacks and whites. Crane works with everything but. She calls her piece, “The Andreamademedoit grayscale building.”

Blackmon’s piece is a woven square of blacks, whites and grays with small, thin stripes of green running through it. It’s almost the same color of yellowish-green — the only color — that Crane used to light up an upper-story window in her piece. Crane thought of it as cheating when she painted it in.

“Then I get hers, and it has that same little bit of color,” she said.

Hanging on a perpendicular wall are the pieces paired and prompted by sacred geometry. Crane’s is inspired by the Celtic triad, whereas Blackmon’s is cellular: her label notes the piece, made up of hundreds of lace circles, is based on single-celled organisms with intricate skeletons.

“We could have done anything,” Crane said.

But both pieces are based around circles.

“I explore: Playfully, at times, as I watch patterns and creations emerge,” Blackmon wrote in a previous artist statement explaining some of her creation process.

The Albert Lea painter’s style has a surrealist influence, and she considers her work more literal than her counterpart. Crane said she has enjoyed seeing the way fellow artist Blackmon has interpreted the themes.

“I know why I did what I did, but getting into her mind like this is very inspirational,” Crane said.

Nonetheless, the show presented its challenges. Before these pieces, Crane said she hadn’t spent much time working in a square format. Hanging the pieces, too, was a challenge: to display them in a way that paired them together obviously but also gave the pieces room to breathe along the wall.

But challenges like these, Crane said, have prompted growth.

“After being an artist for 30 years, being able to say that I’ve grown as an artist because of this show is very exciting for me,” Crane said. “Because you get to thinking that you’re where you’re going to be, and all of a sudden, someone throws a curveball like this and you’re thinking, ‘OK. I’m gonna rise to this and get it done.’”