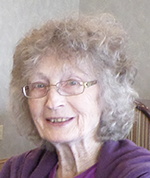 She was born March 9, 1935, to Bernard and Bertina Diesman in Geneva.

Bernice was a homemaker most of her life, but did work at Land O’Lakes in Albert Lea, Lakeview Nursing Home in the housekeeping department in Fairmont, and did housecleaning for several private families in the Fairmont area.

There will be no funeral services per Bernice’s request. Immediate family celebration will be at a later date.