Funeral services for Charles “Chuck” Francis Harty will be at 11 a.m. Friday at St. Theodore Catholic Church in Albert Lea. Visitation will be from 5 to 8 p.m. Thursday at Bonnerup Funeral Service in Albert Lea and again one hour prior at the church. Interment will be at Geneva Cemetery. Military honors accorded by Albert Lea area veterans organizations. 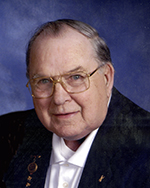 Chuck passed away Tuesday, May 1, 2018, after a courageous seven-year long fight with cancer. He was 81.

Charles “Chuck” Francis Harty was born Nov. 8, 1936, in Albert Lea to Dennis and Mary (Mattocks) Harty in Albert Lea. He was the fifth of six children. He graduated from Albert Lea High School in 1955. After high school he joined the Navy and served from 1955 to 1963, including four years in the Navy Reserves. After the Navy he began his career as an electrician, working for International Brotherhood of Electrical Workers in Southern Minnesota, which included many residential and commercial electrical assignments in the state.

On March 15, 1986, Chuck married Mary Carol Vogt at Salem Lutheran Church and they celebrated with family and friends at the Eagles Club in Albert Lea.

Chuck was a member of the American Legion and Veterans of Foreign Wars. Much of his time over the past 56 years was involved with the Fraternal Order of Eagles Aerie No. 2258. In 1972, Chuck’s honors started with the Albert Lea FOE 2258 Eagle of the Year. He then served as club president in 1974 to 1975, member of the Albert Lea FOE 2258 degree team for more than 35 years, inducted into the Minnesota State Aerie Hall of Fame in 2006, received the Outstanding and Dedicated Service Award for Albert Lea FOE 2258 in 2007, and in 2008 he received the FOE Award of Merit for his dedication to the annual cancer telethons in southern Minnesota. Chuck volunteered countless hours, living the Eagles motto of “People Helping People.”

Chuck loved watching and attending sporting events, as he did not miss a football or hockey game while Jason and Brian were in high school. He especially loved attending his grandkids’ activities — hockey games in the winter, dance recitals in the spring, soccer games in the summer and fall, and concerts for band and choir throughout the year.

Chuck will be greatly missed by all who knew him.

His family would like to extend their thanks and appreciation to the nurses and staff at Mayo Clinic Health System in Albert Lea and Austin and St. Marys Hospital in Rochester, along with those assisting at Good Samaritan Society of Albert Lea. The care that was given Chuck over the past couple of months was genuine, sincere and heartfelt.

“Thank you all for what you do — we are forever grateful.”