Funeral Services for Clair “Terry” Jenson of Albert Lea will be at 11 a.m. Tuesday at Trinity Lutheran Church in Albert Lea. The Rev. Eileen Woyen will officiate. Interment will be in Lakewood Cemetery in Albert Lea. Military honors will be accorded by Albert Lea veterans organizations. Visitation will be one hour before services at the church. 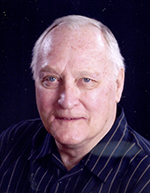 He was born Oct.10, 1936, in Bancroft Township, the son of Fremodt and Vera (Kendrick) Jenson.

Terry attended Albert Lea High School and then proudly served his country in the U.S. Marines from 1953-55.

After his honorable discharge he returned home and began working at the Albert Lea Tribune and Austin Daily Herald, working in composing and as the pressroom foreman. After retiring, he enjoyed his work as a custodian for District No. 241. Clair also bartended at the Stables Supper club evenings and weekends for more than 25 years.

He married Charlene H. Peterson on Sept. 9, 1956, at St. Olaf Lutheran Church in Austin, and to this union Shawn, Randy, Jonelle, Kristin and Mitchell were born.

Together they enjoyed raising their family and immersing themselves in their many activities, which included showing horses. They also enjoyed spending time with family and friends at Beaver Lake and traveling, which included trips to Europe and Asia.

He was a lifelong member of Trinity Lutheran Church, where he was past president of the congregation and sang in the choir for many years.

He was preceded in death by his parents; his son, Mitchell; his wife, Charlene; and his constant companion and pet friend, Barker.

Terry will be lovingly remembered for his ability to “fix things,” his supervisory skills and his always-present keen sense of humor.