Visitation for Donald R. Giles, 85, of Albert Lea will be from 4 to 7 p.m. Thursday at Bayview/Freeborn Funeral Home. There will be a brief service at 6 p.m. The Rev. Daphne Hamborg will officiate. Military honors will be accorded by local veterans organizations. Online condolences are welcome at www.bayviewfuneral.com. 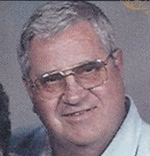 Donald Robert Giles was born Aug. 25, 1932, to Lloyd and Nellie (Grave) Giles in Iowa City, Iowa. The family moved to the Geneva area, where Don attended Geneva- Ellendale schools. Don enlisted in the U.S. Navy in 1952.

He met and married Myrna Cornick. They had two children, Robert and Kathy. The couple later divorced. On Oct. 19, 1963, Don married Marilyn Schumacher. They had four children, Donna, Michael, Martha and Frank.

Don had a great, dry sense of humor. He met so many people and had many great friends.

Don had a great time and really loved all of the Hospice staff who helped him over the last two years.