Michael Hench, formerly of Albert Lea, was recently named the Schmidt Music Educator of the Year for 2017-18 for a seven-state region which covers Minnesota, Iowa, Wisconsin, South Dakota, North Dakota, Missouri and Montana. 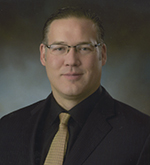 According to a press release, Hench is a graduate of Albert Lea High School and the University of South Dakota, where he earned his bachelor’s of music education degree. He is in his 18th year of teaching and his eighth year of director of bands at Roosevelt High School in Sioux Falls, South Dakota.

He is a member of South Dakota Band Masters, Phi Beta Mu and serves as the director of the Mid-West Ambassadors of the International Trumpet Guild, Brassworks and the Mid-American Competing Band Directors Association.

Hench was the 2009 winner of the American School Band Directors Association Distinguished Young Band Director Award for the state of Minnesota.  He is a member of the Conn-Selmer VIP Program and was selected to the U.S. Army All-American Director’s Institute.