Gary D. Sola passed away at the age of 64 on Thursday, May 17, 2018, at Comforcare surrounded by his family, due to complications from lymphoma — which he battled for four years. 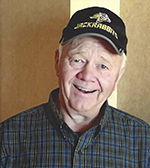 Gary Dean Sola was born April 7, 1954, to Odean and Lois (VanPelt) Sola in Austin. He was baptized, confirmed and attended Deer Creek Valley Lutheran Church in Glenville his entire life. Gary attended Lyle schools and graduated in 1972, and attended University of Minnesota-Waseca for a short time until he was called to his farming career.

Gary married his high school sweetheart, Marcia Pell, on June 22, 1974, at Our Saviors Church in Lyle. They lived and farmed in rural Northwood for 34 years until they built a new home on the Sola homestead in Minnesota in 2008. Gary farmed his entire life until his health pushed him to retire.

Gary was a steward of the land and he always said farming wasn’t a job. Gary and his dad, Odean, farmed and raised cattle together for many years. Spring and fall were special times that Gary loved to be part of. He enjoyed working with his nephew, Troy, for 25 years, who helped him put in the crops. There were always hired men around and they would enjoy the noon meals and lunches. He also sold seed corn to his neighbors for many years. Gary lived his life to make sure his nieces and nephews knew his passion for the land, appreciation for hard work and knowing the family farm blessings they had been given from God.

He was always grateful to God for his many blessings in his life and always thought of others first.

Gary was an avid sports fan and participated in football, basketball, baseball, softball and bowling. He was especially proud of bowling many 700 series. He enjoyed the March Madness college basketball tournament and the Minnesota Twins and Vikings. Gary served on the church council, was a trustee for Deer Creek Township in Iowa and was also the treasurer of the Deer Creek ditch committee, which he inherited from his father. Gary and Marcia enjoyed their timeshare in Lake Okoboji, Iowa, every year, along with their yearly vacations when they could travel.

Gary left this life with a huge, kind heart and battled his disease with such stamina. A special thanks to Dr. Inwards and Laurie from Rochester for their care and for nurse Tanya’s excellent care for Gary from Heartland Hospice in his last months.

Gary was preceded in death by his grandparents; his father, Odean Sola; his father-in-law, Lester Pell; nephews Gregory Ellingson and Caleb Ellingson; and many aunts and uncles, cousins and friends.

A celebration of Gary’s life will be at 11 a.m. Tuesday at Deer Creek Valley Lutheran Church in rural Glenville with the Rev. David Efflandt officiating.  Interment will follow at London-Deer Creek Cemetery in rural Northwood. Visitation will be from 4 to 7 p.m. Monday at Clasen-Jordan Mortuary in Austin and at the church one hour before the funeral service.

“For now, we say goodbye to a beloved husband, son, brother, uncle, friend and neighbor, but a part of us goes with you with many memories … but we will meet again.”