Funeral services for Harold “Babe” L. Brandt, 82, of Albert Lea will be at 2 p.m. Wednesday at Ascension Lutheran Church. The Rev. Mark Boorsma will officiate. Interment will be at Pilgrim’s Rest Cemetery in Myrtle. Visitation will be from 5 to 7 p.m. Tuesday at Bayview/Freeborn Funeral Home and one hour prior to the service at the church. 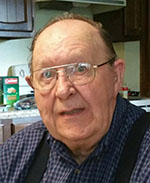 Harold Leonard Brandt passed away Saturday, May 26, 2018, surrounded by his loving family at Good Samaritan Society of Albert Lea. Harold was born Aug. 11, 1935, in Albert Lea, to Arnold and Edna (Leschefski) Brandt.

For many years he was the baby of the family and was affectionately known as Babe. Babe met and married the love of his life, Lois Wahlers, on March 25, 1956. They had an unending love that will bring them together in heaven. The lovebirds happily created a family by having six children. Babe so loved his children he chose to work three jobs so they could be raised by their mom. He worked at Wilson & Co., Ray’s junkyard and was a much-loved school bus driver. Harold was a longtime member of Grace Lutheran Church, where he was an usher for many years. He later became a member at Ascension Lutheran Church.

Memorials are preferred to The Parkinson’s Foundation or the food shelf.

Babe wasn’t a suit wearing kind of guy, so please feel free to dress casual at the service.