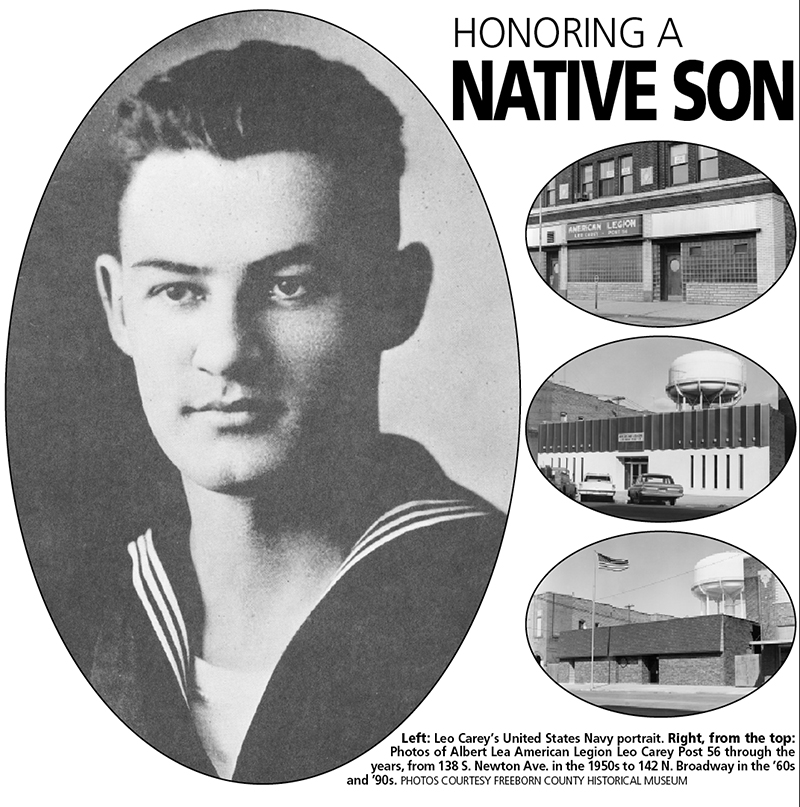 Albert Lea was a different place at the turn of the 20th century. Roads weren’t paved, there were no sidewalks, and horses and buggies ran through the streets instead of automobiles.

While a lot about Albert Lea was different from what it is today, one ideal has remained over time: Albert Lea remembers its veterans.

Leo Martin Carey was born Nov. 11, 1894, to James and Mary Carey. The youngest of five children, he joined sister, Bridget, and brothers Lawrence, Michael and James. He grew up and attended school in Albert Lea, graduating in 1914. During his high school years, Leo Carey played basketball, was a part of the school band, participated in the drama club and was the class president in 1914. His senior yearbook lists him as having the nickname “Ole.”

The same year Carey graduated high school, World War I would start to take hold, starting with the assassination of Archduke Franz Ferdinand. Back in Albert Lea, Carey worked at the post office over the summer of 1914 before starting at St. Mary’s College in Winona. 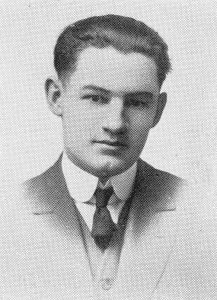 Life for Carey and thousands upon thousands of other young Americans changed as a result of the United States Congress declaring war against Germany on April 6, 1917. In July 1917, Carey would enlist in the U.S. Navy, after the war had entangled such countries as Germany, Austria-Hungary, Bulgaria and the Ottoman Empire (making up the Central Powers) fighting against Great Britain, France, Russia, Italy, Romania, Japan and the U.S. (the Allied Powers).

Due to new military technologies and the implement of trench warfare, World War I saw unprecedented levels of death and destruction for its time period. By the time the war was over in 1918 and the Allied Powers claimed victory, more than 16 million people — soldiers and civilians alike — were dead.

Carey joined the 16 million lost on May 2, 1918, when he became the first Freeborn County native to give their life for their country. He was aboard the USS Tyler, which was on its way back to the U.S. when it was torpedoed by a German U-boat along the Strait of Gibraltar. Out of reportedly 50 men on board, Carey was one of five who were killed in the attack. He was at the radio controls when the ship was torpedoed, and would ultimately go down with the ship.

A May 15, 1918, edition of the Albert Lea Times Enterprise read, “The people of Albert Lea and Freeborn County are fast coming to realize we are at war,” in an article reporting Carey’s death, which also quoted the message Carey’s parents received from Washington, D.C., about their son’s death. It went on to say that James Carey had last heard from his son in a letter received about seven weeks before Leo Carey’s death. Leo Carey told his father in the letter, “Don’t worry about me. The ship is manned by all experienced sailors. The boat was built in 1916 and is a good one.” Carey was likely the last one to die on the boat. As the Freeborn County Standard reported May 9, 1918, that Carey’s position as a radio operator was “especially difficult. He has to remain at his instrument, sending out calls for help until it is out of commission, and is generally the last man to leave the boat.”

When the Albert Lea American Legion post was organized in late 1919, the decision was made to honor the memory of the first member of the armed forces from Freeborn County to die in World War I. The result is today’s Leo Carey Post 56. Carey’s name is one of 12 etched into a memorial in St. Theodore Catholic Cemetery, which honors the members of the parish who died during wartime. There are four names from World War I and eight more from World War II on the memorial, dedicated by the local Knights of Columbus in 1945.

James and Mary Ellen Carey are buried in that same cemetery. The body of their youngest son never came back to Albert Lea, leaving Leo Carey forever buried in the Atlantic Ocean. Near his parents’ grave, though, is a tombstone erected by the American Legion, which serves as a symbolic memorial to the county’s first casualty of World War I.

Leo Carey’s name is one of 60 Freeborn County residents from the World War I era who are honored on the memorial monument in Graceland Cemetery, which was dedicated in 1947.

Local veteran and American Legion member Larry Tonder took it upon himself to research more of Carey’s day-to-day life in Albert Lea, and will be making presentations at the Legion.

“We had the general information, but I was interested in what his day-to-day life was,” Tonder said.

During the presentations Tonder is working on, he plans to ask those in attendance to take a moment of silence for Carey, and possibly face his portrait that hangs in the Legion and “thank God for him.”

“It means a lot to me. I think he was a brave man,” Tonder said. “He went down with the ship.”