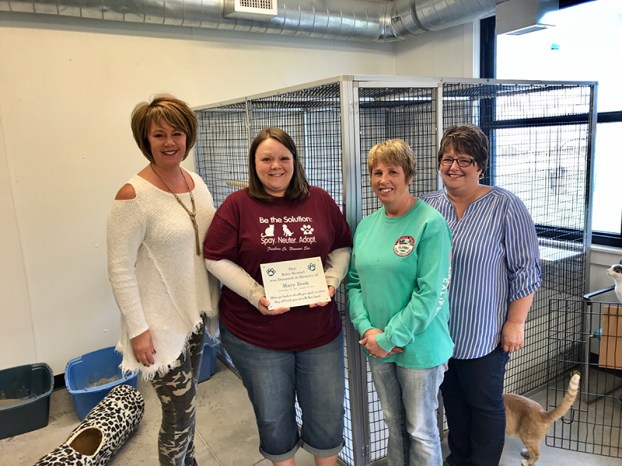 Donations from the Mary Zenk Memorial Fund and Freeborn Mower Cooperative’s Operation Round Up program were used to purchase a kitty kennel for the cat room at the Humane Society of Freeborn County. A plaque will be attached to the unit in honor of Zenk. - Provided

The Humane Society of Freeborn County recently added a kitty kennel to its cat room. The purchase of the kitty kennel, which costs $2,100, was made possible by a grant from Freeborn Mower Cooperative’s Operation Round Up program and a $1,700 donation from the Mary Zenk Memorial Fund.

The 6-by-6-by-6-foot kitty kennel serves multiple purposes. According to Humane Society staff, it is used to house several smaller kittens who are ready for adoption, but not ready to be loose with the larger and older cats housed in the cat room. Because the kittens are kept in the kennel instead of in foster homes, the kittens are able to be adopted out easier and sooner.

The kennel can be used to keep cats and kittens from the same household together and make the transition to the shelter less stressful. They can also use the kennel to introduce new cats to the cat room, without releasing them into the room to interact freely with the the other felines.

The unit bears a plaque noting the kennel was donated in memory of Zenk. After her passing, Zenk’s friend Julia Thompson reached out to the Humane Society to see if there was anything the shelter needed. Robyn Joel, fundraising coordinator for the Humane Society, mentioned the kitty kennel, and Thompson recruited more of Zenk’s friends to help raise the funds needed for the purchase.

MINNEAPOLIS — Student activists at the University of Minnesota are trying to reinstate a medical school fellowship in reproductive health... read more