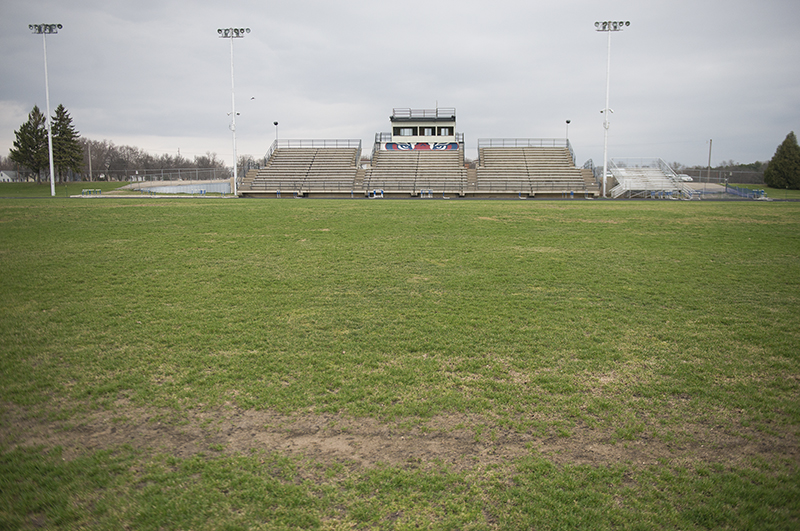 What is district proposing in referendum?

After months of meetings, questions, feedback and planning, opinions about Independent School District 241’s $24.615 million bond referendum will come to a head at the polls Tuesday.

Supporters of the proposal, which calls for updates to Hammer Complex, Halverson Elementary School and Albert Lea High School, have voiced appreciation for safer practice fields, better facilities — especially for female athletes — more district gym space, a field house with room for all of the sports that use it, the potential for increased community access to facilities and a more welcoming facility for visitors.

Those critical of the referendum have expressed concern for the proposed facility’s price tag and a lack of presented options for the updates. Albert Lea Superintendent Mike Funk and Deputy Superintendent Lori Volz both said they recognize farmers are living through a tough agricultural economy. Should the referendum pass, it would have no increase on taxes for a $100,000 home and for those with ag homestead land and non-ag homestead land. If the referendum does not pass, taxpayers would see a decrease in their taxes in 2020, amounting to $34 on a $100,000 home.

According to activities director Afton Wacholz, the referendum would allow the district to shoot several birds with one stone, updating multiple things at once rather than rolling through perpetual small changes and never quite finishing.

“To see what we have right now … to what we’re looking at, it’s drastic,” Wacholz said. This, though, is because Hammer Field has not been updated for approximately 60 years. She also said the district is focusing on areas that have been brought up by the community.

“Our goal is to build a facility that will sustain us for the next 60 years,” she said. For her, that means Hammer Complex cannot be a short-term fix or part-way fix. 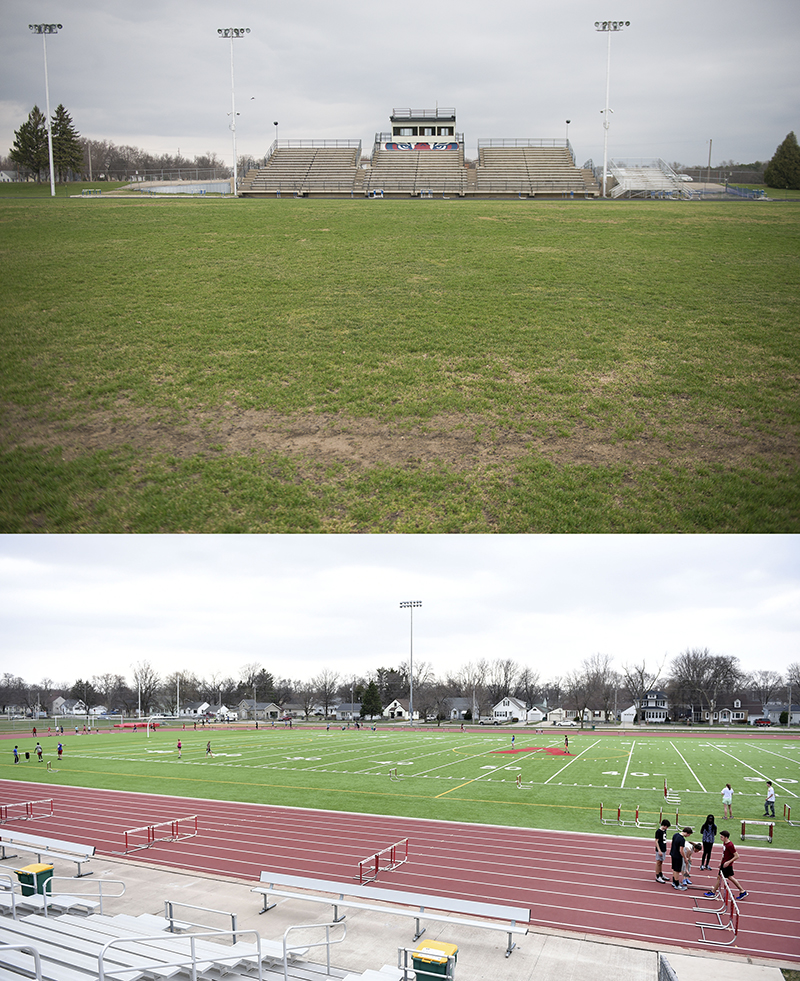 Jim Gustafson Field is shown earlier this week, top, in contrast to Austin’s Art Hass Stadium. Proposed updates under the Albert Lea referendum would include installing artificial turf, installing running water and bathrooms, redesigning practice field layouts, irrigating all fields, creating a black-top parking lot, purchasing a new scoreboard and making Hammer Complex handicap accessible and ADA compliant, among other updates. Austin’s Wescott Athletic Complex already has a pair of fields with artificial turf and serves both as an extra playing surface for soccer as well as a practice field. Albert Lea’s football and boys’ and girls’ soccer teams all play their home games on the same field. – Colleen Harrison and Eric Johnson/Albert Lea Tribune

Funk said the proposed facility is not the grandiose option. He mentioned the cheaper choice of aluminum versus concrete bleachers, retaining the current lighting for Hammer Field and leaving out a press box for the visitor’s side of the stadium as examples of where the district has held back.

“There are not a lot of extra bells and whistles in this plan,” Funk said.

Volz said maintenance costs for the new facility, which would include a turf football field, would not increase, as the efficiency of the new facility’s operation would cover its expanded square footage.

“Labor hours will be the same,” she said. “It’s just different methods.”

Funk said maintenance focus could shift from the football field to other fields under the care of the district. Staff-sharing with the city is also still on the table, Funk said, although an official agreement would have to hold off until the bond referendum had passed.

Although Volz said most of the questions she has personally fielded regarding the referendum have been tax-related, the community has also had what Funk called a “focused” discussion of the district’s junior high sports situation.

If the referendum were to fail, Funk said the district would be required to make changes as soon as they received a complaint for either Title IX or ADA noncompliance.

“The need exists, OK?” Funk said. “People have different opinions on how solve it, but I think it’s pretty universal that we have to do something.”

The money for those changes would come out of the district’s operating dollars. Volz said that situation would be a difficult one to work through long-term.

“We’re in a good spot with everything else,” she said, citing steady and slightly increasing enrollment and adequate facilities across the district. “We need to get this facility up to speed, we need to address the Title IX issues, ADA, then this district will be in a very good spot facility-wise.”

The changes proposed as the product of a passed 20-year general obligation building bond include:

At Halverson, the office space now is close to the center of the building and has been since the 1960s, Halverson Principal Tonya Franks said.

“Relocating that space increases security because then we don’t have unnecessary traffic in our building,” she said.

In addition, Halverson’s gym space would double with a building extension out into space that is being used as a parking lot. The then-full-size gym would also have a set of bleachers added along one wall. If need be, Volz said the district could recoup parking space lost to the expansion.

Turning into Hammer Complex, the changes start outside the stadium in the parking lot. Rather than the current gravel arrangement, the parking lot will be blacktopped. Funk said the surfaced lot proposed is designed to be slightly smaller than the parking lot’s size now, but Volz said there is room for expansion of the lot. Throughout the complex, there are plans to add sidewalks for access to different field locations.

Between the entrance and the stands would be a plaza for fans to meet or relax together. The top-loading stands, which Funk said will be shorter but wider, should hold approximately the same amount of people they do now. Rather than replacing concrete with concrete, Funk said the school district has opted for aluminum stands. At the top of the stands, on the same level as the plaza, would be a railing from which fans could also watch the game; this change is intended to bring the stadium up to compliance with the Americans with Disabilities Act. There will also be a hill area where people can sit outside of the stands.

The stadium would replace its portable restrooms with permanent ones with running water. The concessions area would also have running water. In addition, the proposal includes a doubling in size for the press box and a third level for cameras — an area that is presently not used due to safety concerns.

On the opposite side, the visiting team’s bleacher area will stay the same. Funk said visiting fans may have access to restrooms in the field house.

The field would make the switch from grass to turf, which Funk said would make the school eligible to host section semi-finals (or higher) for football and soccer. The field’s lighting system will stay, the superintendent said. Finally, Hammer Field would receive a new scoreboard compatible with automatic timing for track and field meets.

Funk said the community has access to the track via a turnstile, and that track access would continue should the referendum move forward. 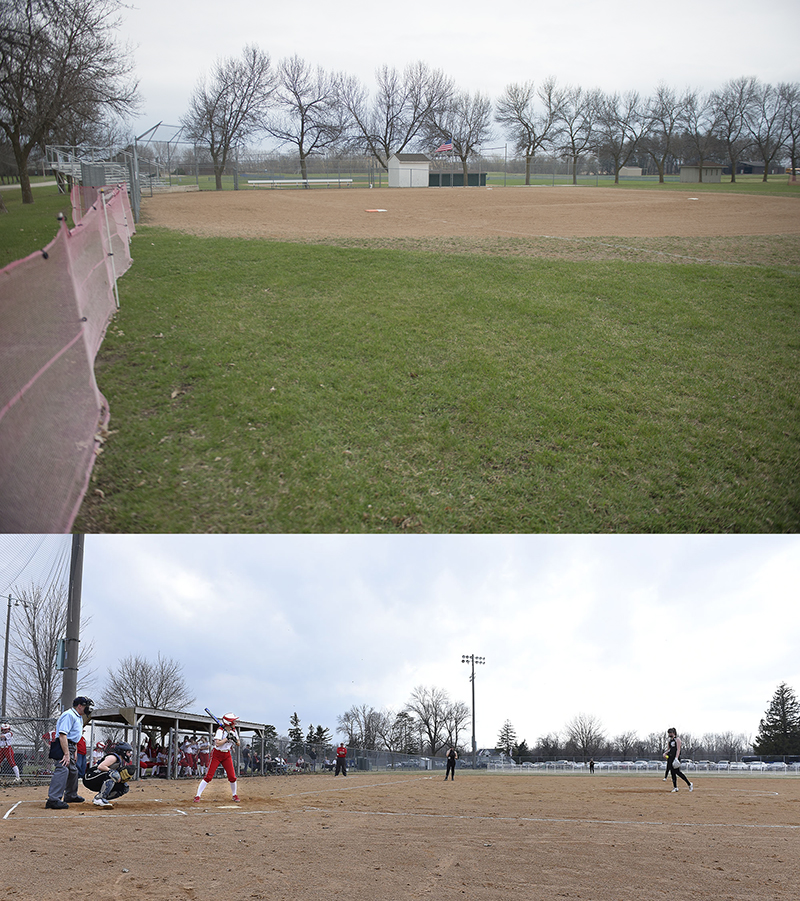 Concerns with the current field house are related to Title IX, Funk said; offerings are not equitable between boys’ and girls’ sports.

“The Title IX issue is a real one for our district,” he said, including both locker and play spaces.

Changes in the field house include more locker rooms and more storage space. The proposed field house will keep a similar footprint, but grow upward one level to help add locker rooms. In addition, there will be changing facilities for officials, which Funk said the facility does not have now. The second floor will also include a classroom space that can be used for coaches’ meetings, banquets or as a viewing space for grandparents or small children outside of the weather. Because of the size and second level, the field house would also include an elevator.

Changes to the field house would mean a move for the district garage. Funk said it would likely shift across the road. This move has been budgeted in as part of the anticipated cost and would be covered by the bond, Funk said.

Bringing softball spaces up to speed

Two baseball and two softball fields would be arranged around a central complex, which would house storage and concessions. Softball and baseball lockers would still be located in the field house, but the softball complex would include restrooms and running water.

The softball field would include dugouts, permanent fencing, lights and a turf infield to make it comparable to Hayek Field and also to allow students to utilize the field more.

“When we have springs like this, you can get out there and practice and start playing a lot sooner,” Funk said.

Changes on the practice fields

According to Funk, the football team’s practice field is not an even one. The entire field complex would be leveled. To increase student safety and surface consistency, each field would have drainage tile and irrigation installed. There will also be an addition: one more soccer field, likely used for ninth-grade games, Funk said.

If they also use the practice fields, Funk said the addition of a soccer field could mean a chance to use their Hammer facility alone for tournaments, which are currently played at three different sites in town.

Finishing the unfinished at the high school

Since Albert Lea High School was built in 2000, one swim locker room was left unfinished and has been standing as bare space, Funk said. Because the boys’ and girls’ swim teams have different seasons, having one locker room has not posed an issue, but having it complete means having another swim locker room to use. The referendum proposal also sets aside funding to install an HVAC system in the high school gym and swim locker room. 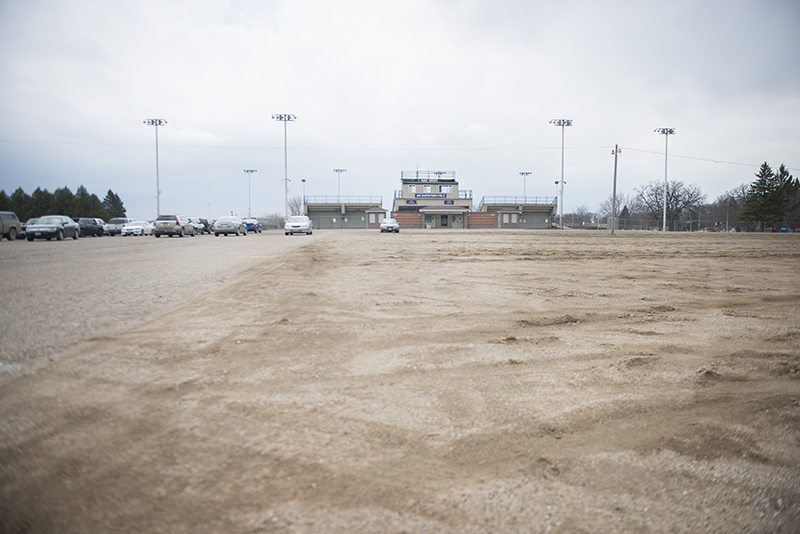 The parking lot between Jim Gustafson Field and Hammer Field is pictured earlier this week. Proposed updates to Hammer Complex under the Albert Lea referendum would include creating a blacktop parking lot. – Colleen Harrison/Albert Lea Tribune

Where do I vote?

Independent School District 241 has nine polling sites for school district elections not held on the date of a statewide election. To vote in Tuesday’s special election, here are your polling locations:

• Brookside School: Vote here if you live in the city of Albert Lea, Ward 1

•United Methodist Church: Vote here if you live in the city of Albert Lea, Ward 3; the city of Manchester; the city of Twin Lakes; Manchester Township; Pickerel Lake Township and Nunda Township.

• Grace Lutheran Church: Vote here if you live in the city of Albert Lea, Ward 4.

• City Hall: Vote here if you live in the city of Albert Lea, Ward 5.

• Halverson Elementary School: Vote here if you live in the city of Albert Lea, Ward 6; Albert Lea Township precincts 1 and 2 and Freeman Township.

• Hayward Community Hall (Hayward): Vote here if you live in the city of Hayward; Oakland Township and Hayward Township.