A funeral Mass for Jacqueline Anderson will be at 10 a.m. Saturday at St. Theodore Catholic Church in Albert Lea. The Rev. Kurt Farrell will officiate. Visitation will be from 5 to 7 p.m. Friday at Bonnerup Funeral Service, 2210 E. Main St. in Albert Lea, and again one hour prior to the service at church. Interment will be at Hillcrest Cemetery in Albert Lea. 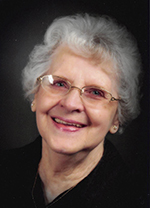 Jacqueline “Jackie” Ann Anderson passed away Friday, May 4, 2018, at Good Samaritan Society of Albert Lea from complications of Parkinson’s disease. She was 81.

Jacqueline Ann was born Jan. 17, 1937, to parents Chester and Florence Chapman in St. Paul. She was baptized at the cathedral in St. Paul and went through first communion and confirmation at St. Theodore Catholic Church. She attended St. Theodore Elementary School and graduated from Albert Lea High School in 1955. She worked at National T Grocery Store as a checker, then at Woolworth’s Dime Store at the lunch counter.

On June 16, 1956, she married John Weitzel. To this union a daughter, Patricia (Weitzel) Thies; and a son, Donald Weitzel, were born. John and Jackie were married for 28 years before his sudden passing in 1984. In 1985, she married Cornell “Corny” Anderson for 24 years until his passing in 2009.

In her free time, Jackie loved to travel with her family and liked to read many books. She was involved with bowling in a mixed league and women’s league until 2016. She was always kind and considerate to anyone she met and will be missed by many in this community.

She was preceded in death by her parents Chester and Florence Chapman; husbands John Weitzel and Cornell Anderson; sister, Gertrude “Trudy” Zimmerman; and brother, Thomas Chapman.