Funeral services for Jerome “Jerry” Rasmussen will be at 10 a.m. Tuesday at Grace Lutheran Church in Albert Lea. The Rev. Shane Koepke will officiate. Visitation will be from 4 to 7 p.m. Monday at the Bonnerup Funeral chapel in Albert Lea and again one hour prior to the service at church. Interment will be in Hillcrest Cemetery. 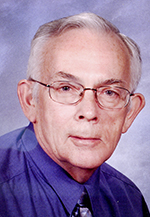 Jerome Edward Rasmussen was born Sept. 5, 1942, in Albert Lea to James and Lila (Nelson) Rasmussen. He moved around as a child, and would graduate from Albert Lea High School in 1960.

Following a few years of vocational training, Jerry was employed at Streater, where he would become a lead man. He would retire after nearly 30 years there.

Jerry was united in marriage to Gail Evenson on April 15, 1978, in Albert Lea. To this union, the couple was blessed with two sons: Marc and Matt.

Jerry enjoyed many things in life. He stayed active in a bowling league for nearly 40 years, he cared for his flower gardens and he meticulously maintained his yard and his home. Jerry was a hard worker, and liked to stay busy — he never liked to sit still. He was a member of the Eagles, where he enjoyed going there for good times and conversation.

Jerry’s favorite thing in the world was being a grandpa to his six grandchildren. He was a great husband, father and grandfather who always stayed humble. The family will miss his smile and, most of all, his laugh.

Jerry is preceded in death by both parents, James and Lila; and a sister, Joyce Hanson.