Juanita Rae Wheeler, 63, of New Richland passed away in the early morning hours of Friday, May 18, 2018, at Hope Lodge in Minneapolis. 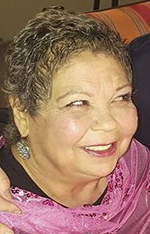 Juanita will be lovingly remembered and dearly missed by her children Heather, Melissa (Chris) and Jacob (Megan). Juanita will also be fondly remembered by her two grandchildren, Bradyn and Mayson; and her brother, Earnie. She was a loving mother, grandmother and sister who loved to dance, make jokes (she was hilarious) and do arts and crafts. Juanita’s family meant the world to her and they felt the depth of her love daily. Juanita had been battling lung cancer since 2015 and is now at peace with the Heavenly Father.

Memorial services for Carol Christenson, 68, of Albert Lea will be held at 11 a.m. Wednesday at Grace Lutheran Church.... read more