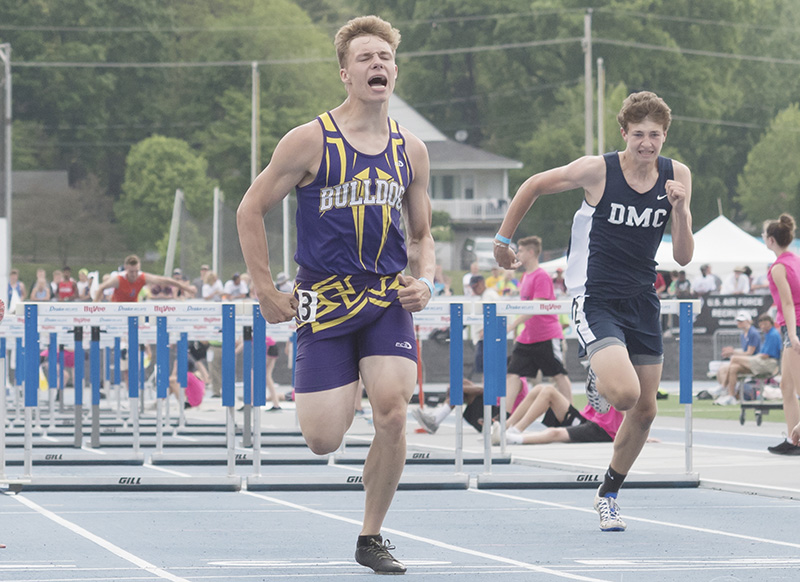 Lake Mills senior Grant Fjelstad crosses the finish line of the 110-meter hurdles Saturday afternoon at the Iowa high school state track and field meet. Fjelstad would be crowned the state champion with a time of 14.71. - Lory Groe/For the Albert Lea Tribune

One year after winning a state title as part of the shuttle hurdle relay team, Lake Mills senior Grant Fjelstad captured another state championship –this time as an individual in the 110-meter hurdles.

In the prelims Friday, Fjelstad won his heat with a time of 15.29, qualifying him for the finals with the third-best time. However, the race was still anyone’s to win as all eight finalists were separated by a half-second in their qualifying times. Fjelstad came in just .14 seconds behind the top qualifier. 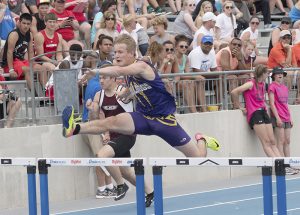 When it came to racetime, there was no question who crossed the finish line first. Fjelstad cruised to his second career track and field championship with a time of 14.71, beating the second-place  finisher by over half a second.

“Grant may be the most gifted athlete that I have ever worked with,” said head coach Dan Rice. “I can put him in just about any event and he will find a way to succeed. He is one of those athletes that people just love to watch because the bigger the stage the better he runs.”

The 110-meter hurdle wasn’t the only event Fjelstad would place in at the state track meet. The shuttle hurdle team consisting of Fjelstad, senior Alex Albert and juniors Tommy Kaktis and Cael Boehmer also competed in the finals Saturday. 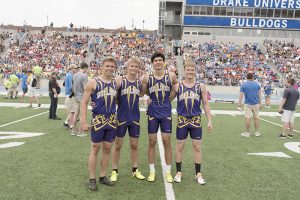 Also competing for the Bulldogs at the state meet was Carson Rygh running in the the 3,200-meter run. Rygh ran a 10:16.04 two-mile, which landed him in ninth place overall.

The 4×800 team of Kaktis, sophomores Mason Fritz and Jackson Rice, and freshman Caleb Albert would finish with a time of 8:34.42 and 19th place.

Senior Gabe Irons participated in the discus event. Irons’ best throw was 138-10, which landed him in 18th place.

“I was pleased with how our boys competed this weekend,” Rice said. “The events we are traditionally strong in, like the hurdles, were an obvious success but we also had a personal best in our 4x800m relay.”

Of the 10 athletes the Bulldogs sent to the state meet, all but three of them will return to the team next year, including the entire 4×800 team. Fjelstad, Alberts and Irons are the only three seniors to qualify for the meet, making the future of the program bright and full of potential.

“We are going to lose some key athletes this year, particularly Gabe Irons who has been the backbone of our throws program for four years and broke the school record this year in the discus,” Rice said. “Alex Albert, who was able to score in all sorts of events, and obviously Grant Fjelstad.

“However, the bulk of our lineup was made up from the sophomore class. They filled most of our relays and by the end of the season they were starting to do some real damage in the big meets.  They were a big reason why we were surprisingly close to Forest City at the conference meet this year.”